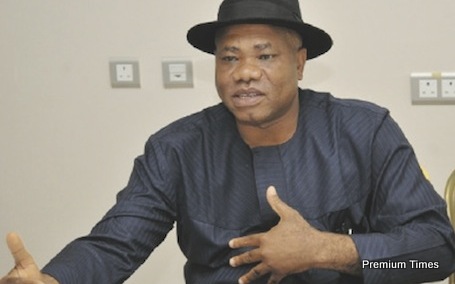 A former Executive Secretary of National Health Insurance Scheme, Olufemi Thomas, accused of money laundering by the Economic and Financial Crimes Commission, has turned himself in after the commission threatened to declare him wanted.

Mr. Thomas arrived the EFCC office around 10 a.m. Friday, and was questioned by the commission’s operatives.

A source at the commission confirmed to PREMIUM TIMES that Mr. Thomas was later released on administrative bail at about 2 p.m.

The EFCC had on Wednesday threatened to declare Mr. Thomas wanted over $2,198,900 cash seized from Ibiteye Bamidele, a bureau de change operator, arrested at the Lagos airport.

Mr. Bamidele named the NHIS boss as the owner of the cash. He was later handed over to the EFCC on July 8, for further investigation.

The EFCC said efforts to locate Mr. Thomas were futile, hence its decision to declare wanted.
But Mr. Thomas came out from hiding Friday, saying he was not on the run.

Also, Mr. Thomas’s media aide, Sola Adeyemi, in a statement had described his boss as a “thoroughbred professional and dutiful public servant” who would not stand in the face of the law.

“Dr. Femi Thomas is a law-abiding public individual that has treatable addresses in Lagos and Ekiti. He is a man that I work with and I know him for his words and actions. As I speak, we are yet to receive any formal invitation from any quarter on the allegation,” Mr. Adeyemi said.

He added, “For the avoidance of doubt, my boss is not on the run, he is in Nigeria, he is available and ready to present himself to the EFCC as soon as he is invited.”