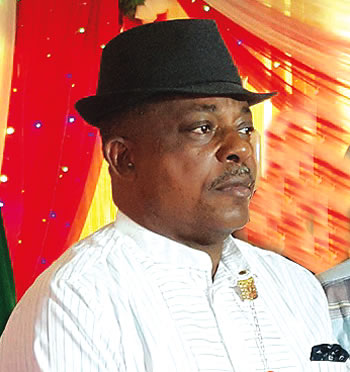 The Peoples Democratic Party on Thursday challenged the Economic and Financial Crimes Commission to also go after the corrupt leaders and members of the All Progressive Congress.

The Acting National Chairman of the PDP, Uche Secondus, gave the challenge when he received a delegation of members PDP in the senate at Legacy House, the party’s campaign office in Abuja.

Mr. Secondus, who called for President Muhamadu Buhari’s intervention, said the anti-graft agency was only going after PDP members in its anti-corruption war leaving those who served under APC uninvestigated.

“So far, statistics has shown that EFCC has only arrested members of our party, those who have served in previous government.

“But there are APC governors and members, who have served various governments, they have been left alone.

“We believe that a government that is serious with anti corruption crusade cannot be one sided or selective. It should be holistic,’’ Mr. Secondus said.

He called on the EFCC to also investigate APC governors rather than targeting only PDP ex-governors and ex-ministers.

“We have seen on the pages of newspapers allegation from Lagos and Rivers states on the ex-governors. What is EFCC doing to those allegations? ” Mr. Secondus asked.

The acting chairman, however, assured that the NWC would work with the PDP senate leadership to make sure they were successful.

Also answering question on the allegation that the NWC spent 12 billion within nine months, Mr. Secondus said the figure was not correct.

He said, “what is correct is that from the sales of forms, we raised over N11 billion.’’

“According to our party’s guideline and constitution, this N11 billion was meant to be shared among the states, local governments and the zones.

“You are also aware that people went on assignment about 15 per cent is also taken away, the rest I can tell you was used for our campaign and elections.

“Nobody, no member of the NWC has embezzled any money,’’ Mr. Secondus said.

He added that the Staff Welfare Association, which made the allegation had apologised through a letter to the NWC.

“We raise our money and we used our money, that is the correct thing,’’ Mr. Secondus added.

Earlier, Godswill Akpabio, who led the delegates, said the aim of the visit was to appreciate the NWC for endorsing the decision of PDP senate caucus that led to their emergence as senate leaders.

Mr. Akpabio, who is the Senate Minority Leader, said the senate PDP caucus unanimously endorsed the action of the NWC so far since May 29.

“We are very proud working with your committee, and today we pass a vote of confidence on the NWC under the leadership of Sencondus.

“We are saying that we are behind you as ambassadors of the senate; we will do our best, positively to project the image of PDP,’’ Akpabio said.

He urged Mr. Buhari to carry everybody along in his administration irrespective of their party affiliations.

He also condemned what he described as the interference of the State Security Services in the electoral matter by detaining INEC officials only in states being controlled by PDP.

He listed Akwa Ibom, Abia and Rivers as states most harassed by the SSS while INEC officials in APC-controlled states were not invited for interrogation.

“No country in the world can claim they have a democracy when it does not have vibrant and viable opposition.

“So any group aiming to kill opposition party does not believe in democracy,’’ Mr. Akpabio said.

On the PDP internal crisis, between the staff and the NWC, Mr. Akpabio said the senators were happy to note that the staff had written an apology letter to the NWC.

Other members of the delegates include Senator Abiodun Olujimi, the Senate Deputy Minority Whip and Sen. Philip Aduda, among others.