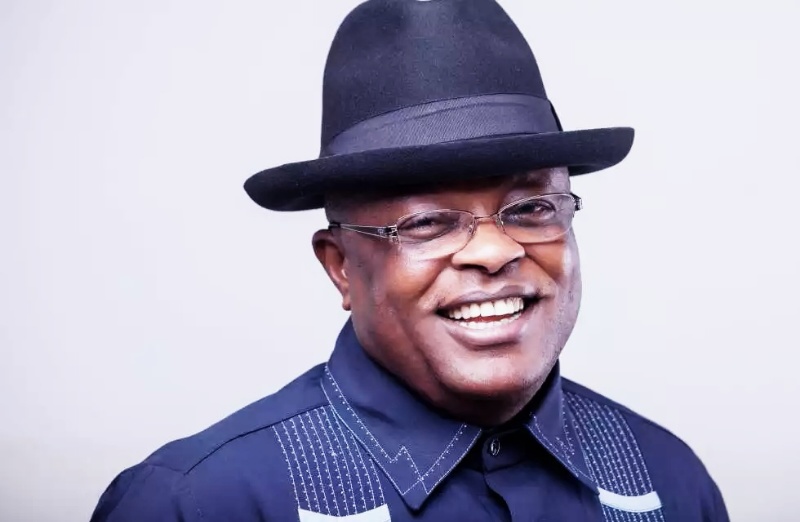 But one of the commissioner nominees, Sabinus Nwankwegu, the governor noted at the event, which took place at the International Conference Centre Abakaliki, was not sworn in because of security issues against him.

Mr. Umahi said he has set up a committee to look into the matter adding that the nominee will be sworn in if the committee clears him.

But PREMIUM TIMES investigation showed that Mr. Nwankwegu, a former Deputy Speaker of Ebonyi State Assembly, is a murder suspect currently on trial.

Investigations revealed that Mr. Nwankwegu was arraigned alongside 21 others following a report by a judicial panel of inquiry set up by a former governor of the state, Sam Egwu, to look into the crisis in Oguzoronweya Autonomous Community in Ozibo Local Government Area, leading to the death of the traditional ruler, Innocent Nwodom in 2005.

The government white paper on the report of the judicial panel of inquiry dated September 2005 which was obtained exclusively by PREMIUM TIMES, indicted the former deputy speaker and recommended his immediate prosecution.

The judicial panel of inquiry was headed by Justice Elvis Ngene. The nine-man panel had representatives from the ministry of justice, State Security Service (SSS), Police, Traditional Rulers Council, etc.

It had five terms of refrence which include: “To determine the remote and immediate causes of the crises that broke out in the community that led to the death of its traditional ruler Eze Innocent Nwodom.

“To identify the groups/individuals that are directly or indirectly involved in the crises leading to the death of the traditional ruler and recommend appropriate action.”

The panel, after its investigations, submitted its report in three separate volumes.

According to the report, the late traditional ruler, Chief Eze, was murdered by a militant group in the community called “Ikuku” led by Mr. Nwankwegu’s Personal Aide, Chukwuma Mbam, and sponsored by Mr. Nwankwegu.

The panel therefore recommended that the state government should severely reprimand him and that take other actions that will serve as a deterrent to other erring and over-bearing political office holders.

It also recommended that a police team should investigate his roles as a principal actor in the crisis and sponsorship of the Ikuku militant group.

The state government accepted the recommendations of the panel and in addition, ordered the prosecution of Mr. Nwankwegu for murder for the roles he played in the death of the monarch.

Investigations further revealed that since then the case has been in court, and at a time, Mr. Nwankwegu and the 21 others were detained in prison custody.

Mr. Nwankwegu was later released by the court on health grounds.

The All Progressive Congress in Ebonyi State had criticized the nomination of Mr. Nwankwegu as commissioner, by the governor, Dave Umahi.

Mr. Nwankwegu was nominated last month for the position.

The State Attorney General and Commissioner for Justice, Augustine Nwankwegu, could not be reached for comments on the issue.

On Sunday, the family of the late traditional ruler denied withdrawing an earlier petition it sent to the state government against the nomination of Mr. Nwankwegu.

The family in a letter sent to the governor through their lawyer, Friday Akpor denied endorsing a communique issued by some people of Ebonyi North East Comstituency which claimed that the family has withdrawn their petition against Mr Nwankwegu.

The letter reads in part: “I wish to register my write up on behalf of the estate of Late Ezeogo Innocent Nwodom represented by his wife, Lolo Nwodom, deceased’s son, Prince Moses Nwodom and family representative, Mr Peter Nwogba”.

“The above named persons have reported to me that they are not part of the communique issued by stakeholders of Ebonyi North East Constituency about the withdrawal of their petition against Hon Sabinus Nwankwegu. Sir, nobody discussed with the family members except Aja Samuel whom they believed has sold his birthright and did not represent the common interest of Nwodom family”.

“I pray you to kindly use your good office to save the family and the ten years old case which the family has single handedly fought to this stage. The family needs justice and fair play”.

It said the decision to nominate Nwankwegu is dealing the image of the state a bad blow in the country and beyond.

No plan to bar members from National Assembly – Dogara