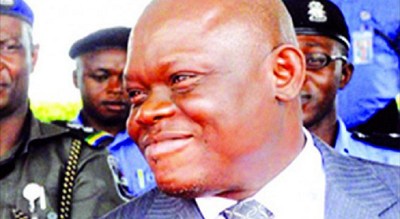 Charge Jonathan’s CSO to court or release him — Lawyer

Andrew Itsekiri, the lawyer of Gordon Obuah, former President Goodluck Jonathan’s chief security officer, has asked the Director General of the SSS, Lawan Daura, to either charge Mr. Obuah to court or release him without further delay.

Mr. Obuah is being detained by the State Security Service although the service has yet to officially speak about the arrest.

In a statement, Mr. Itsekiri said Mr. Obuah is held without a charge and his continued detention by the SSS is placing life-threatening strain on his health.

He said Mr. Obuah, who is diabetic and has a serious case of high blood pressure is being “sadistically” denied water, food and life sustaining medications.

Mr. Itsekiri also said family members and friends of Mr. Obuah have been prevented from seeing him.

Mr. Itsekiri explained that Mr. Obuah’s ordeal began a week before he was detained by the SSS. He said Mr. Daura told his client to report daily to the SSS headquarters for questioning over an allegation, the nature of which was never disclosed to him.

He said he was eventually detained last Thursday after he showed up at the SSS office for the daily questioning. Mr. Itsekiri explained that before Mr. Obuah was finally detained, Mr. Daura had asked him if Mr. Obuah wanted him to personally investigate him or delegate a junior officer to do so.

Since the news of the arrest and detention of Mr. Obuah broke last week, the SSS has yet to issue a statement on why he is being held.

A search was conducted at Mr. Dasuku’s residence in Abuja and his family house in Sokoto simultaneously between Thursday and Friday. The agency later released a statement saying it found sophisticated weapons, exotic armoured cars and other possible incriminating items at Mr. Dasuki’s Abuja residence.

Below is the full statement from Mr Itsekiri:

Nigerians should tell Lawan Daura the director general of the SSS to release Mr Gordon Obuah, the immediate past CSO to the former president Jonathan, immediately or to charge him to court if the SSS has any incriminating evidence of commission of crime against him.

We can tell the public categorically that as we write he has not been confronted with any allegation, neither was he given an opportunity to respond to any allegation before he was taken into custody. His ordeal began about a week preceding his eventual arrest last week Thursday when the director general of the SSS Lawan Daura sadistically on a daily basis requested that he should report to the SSS headquarters to respond to allegations known only to Lawan Daura and which he repeatedly failed to disclose to him despite repeated demands by the erstwhile CSO. On each of the 7 days preceding his arrest he would report to he SSS headquarters at about 8am in the morning and released to go back home at about 11pm without being confronted with any allegation.

At a stage Lawan Daura requested from him if he Lawan should investigate the imaginary allegation or if a junior officer should and the consistent response of the erstwhile CSO was for him to at least know the allegation if any to enable him respond. Lawan Daura never confronted him with any petition until he was taken into custody when he reported last Thursday.

As we write this, nobody can access him including family members, friends and his solicitors. Information available presently as we write this, is that he has been deprived of food, water and his medicines and considering that he is diabetic and suffers from serious high blood pressure ,it is clear that the motive of Lawan Daura is to either watch him die in detention and or torture him to admit to crimes he knows nothing about.

Nigerians should advise Lawan Daura to release him immediately or charge him to a Law court if they have any sustainable allegation against him but definitely not to detain him in the Gestapo like fashion that is presently playing out.