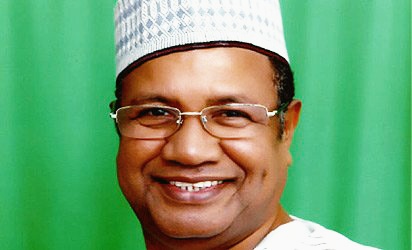 Muhammed Abba-Aji, who once served as an adviser on National Assembly matters to ex-President Goodluck Jonathan, says he has left the opposition Peoples Democratic Party (PDP) because the former president squandered the fortune of the former ruling party.

Mr. Abba-Aji, who formally joined the ruling All Progressives Congress (APC) in Borno state last week, said he would rather seek his political future in APC than remain in PDP.

He also declared his interest to contest the Borno Central Senatorial bye-election to fill the vacancy created by the death of late Senator Zannah Kahlifa who died in May this year.

Mr. Abba-Aji, also a former National Assembly member who represented Borno central Senatorial district between 2003 and 2007, said former President Jonathan allowed corruption and abuse of power a free reign while he was in office.

“Former President Jonathan, who was the major benefactor of the PDP, chose to kill the party for his selfish interest,” Mr. Abba-Aji told journalists in Maiduguri, saying he could not foresee any future for PDP.

“During the tenure of President Jonathan as leader of the PDP, he instilled indiscipline, corruption and lack of patriotism not only among members of the party, but among government officials and political appointees, a situation that made Nigerians to lose hope and decide to not to give their votes to the PDP at the national level.

“Nigerians massively voted President Muhammadu Buhari on the platform of the ruling APC, and I am optimistic that Nigerians will never regret voting for the APC”.

On his long absence from Borno state political scene, especially during the ongoing Boko Haram insurgency that has displaced his constituents from their home town, Bama, the former Senator said he was forced by the ills that characterized years of Jonathan’s presidency to go to Netherlands to study Law to improve his credentials.

He said he was pressured by his constituents to return home and fill the vacuum created ‎by the demise of late Senator Zannah, to whose family he offered condolences.

Senator Abba-Aji had during his time as the presidential adviser to Jonathan on National Assembly matters stood in the forefront of campaigns for the acceptance of the Jonathan candidature in 2011.

But he however pushed his luck of being in the ruling government too far when he, in 2011, told journalists in Maiduguri that the then President Jonathan would be reelected after completing the tenure of late President Umaru Yar’adua, and would serve till 2015 before handing over to his Vice, Namadi Sambo.

Mr. Jonathan, who had no such plans of handing over in 2015, sacked Mr. Abba-Aji shortly after the interview.

After his sack, the Bama-born politician tried his luck at becoming the National chairman of the PDP, but his past unsavoury relationship with the former president who was then seeking a loyal party leader, seemed to have worked against his ambition.

This is not the first time Mr. Abba-Aji would be dumping the PDP for a winning political party.

In 2003, he dumped the party after he alleged being denied senatorial ticket, to take an offer of unchallenged senatorial ticket ‎given to him by the state’s defunct ruling All Nigerian Peoples Party (ANPP), then under the control of former Borno state governor Ali Modu Sheriff.

But after being assisted by the ANPP to actualise his ambition, Mr. Abba-Aji dumped the ANPP and returned to the PDP.

However, he is still regarded as a top contender amongst the numerous contestants angling to fill up the vacant Borno Central Senatorial seat.

Other aspirants are Baba Shettima, a former secretary of the defunct ANPP; Ali Dalori, the present APC state chairman, Kaka Yale, who succeeded him in 2007 only to hand over the ticket to ex-governor Sheriff in 2011; Adamu Lawan Zaufanjimba, who is a manager at the Zenith Bank in Maiduguri and was brought in by governor Kashim Shettima, amongst others to mention.