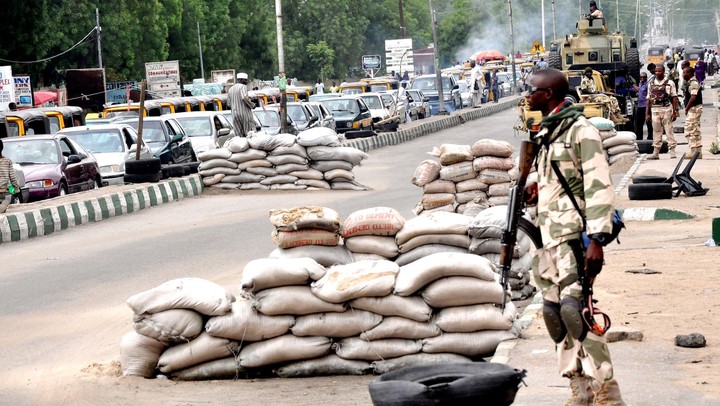 Nigerian soldiers on guard in Maiduguri

The Nigerian military has explained how the suspected mastermind of the Jos and Zaria bombings was arrested.
The defence headquarters had earlier tweeted that the unnamed suspect was taken into custody in Gombe after organising the two attacks that killed 70 people between Sunday and Tuesday.

The spokesperson for the Army, Sani Usman, has given further details on the arrest:

“Please recall that on Sunday 5th July 2015, suspected Boko Haram terrorists carried out coordinated bomb and gun attacks on worshippers at Ýan Taya mosque, Dillimi Street, off Bauchi Road, Jos where the holy month of Ramadan tafsir was holding, and Shagalinku Restaurant, along Bauchi Road, Jos, Plateau State which led to death of over 48 persons, injuring several other persons and destruction of property.

“Similarly, the terrorists carried out another bomb attack on hapless workers undergoing verification exercise at Sabon Gari Local Government Secretariat, Zaria Kaduna State which resulted in the death of over 25 people including a two-year-old child and destruction of property.

“Consequently, security cordon was established in the general areas especially along Bauchi, Gombe and the North Eastern part of the country by troops of 3 Division and Special Task Force, as well as the Department of State Services. This culminated in the successful arrest of the mastermind of the heinous terrorist acts and two of his accomplices at a checkpoint in Dadin Kowa, Gombe State. The terrorist kingpin and his colleagues who disguised in a trailer while trying to evade checks were fished out by troops of Nigerian Army.

“The arrested terrorists are currently being processed for further action and would soon face the full wrath of the law.

“The general public are hereby please requested to be more vigilant, security conscious and report any suspicious persons, movements, and facilities to the security agencies.”