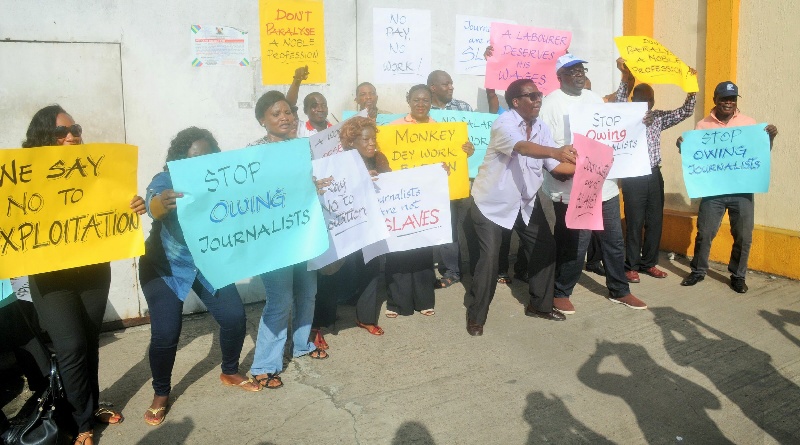 Journalists protest against ThisDay over non-payment of salaries

The Nigeria Union of Journalists on Tuesday picketed the premises of ThisDay newspapers in Apapa, Lagos to protest the non-payment of nine months arrears of salaries owed its members.

The union, led by the NUJ Lagos State Chairman, Deji Elumoye, carried placards and barricaded the entrances of the media organisation, owned by the President of the Newspapers Proprietors Association of Nigeria, Nduka Obaigbena.

Mr. Elumoye, who is also a staff of ThisDay, said he decided to lead the protest against his organisation to show that charity begins at home.

He said the protesting journalists were condemning the continuous refusal of the management of ThisDay and 12 other media houses to settle the several months arrears of salaries to their workers, especially journalists.

”I am an associate editor in Thisday,” he said. “But, I chose to picket Thisday first. There are other media organisations owing over two years, and we will go to all of them. It is time to put a stop to non-payment of salaries in media organisations. Many families cannot pay their house rents or their children’s school fees. The journalists are paid peanuts. Yet, they do not get the salaries. It is sad.”

Urging newspaper publishers to prioritise the welfare of workers, Mr. Elumoye said anyone that cannot operate and pay workers should close his or her business.

He said the publisher of Thisday, Mr. Obaigbena, who is the president of NPAN, must lead by example by paying his workers all their entitlements.

He called on the National Pension Commission to prosecute media owners, who do not remit workers’ pension contributions to serve as deterrent to others.

In his reaction, in solidarity with the NUJ, the Nigeria Labour Congress said it was giving full backing to the protest by journalists against several months of unpaid salaries by the management of some prominent media houses in the country.

The acting president of the Congress, Peters Adeyemi, said the principle and logic that the labourer was deserving of his wages was infinite, sacred and sacrosanct as the core of the employer-worker relationship.

The violation of this principle, Mr. Adeyemi pointed out, was not only a negation of the essence and basis of work, but also a peril to the family and statutory obligations of the worker to the State and his God.

“The picketing of ThisDay represents a bold and courageous response after all the processes of an amicable resolution had been exhausted,” the NLC said. “It also represents the beginning of a long process of engagement with other non-salary-paying media organizations.”

The others include the National Mirror and Newswatch Daily (7 months), both owned by Jimoh Ibrahim; The News/PM News (9 months); the Daily Champion (18 months); Hallmark owned by Emeka Obasi (8 months) and the Daily Times (6 months).

“We stand shoulder to shoulder on the picket line with our members as they seek to enforce their fundamental rights against these organisations,” the NLC said. “In the spirit of our cherished slogan of “an injury to one is an injury to all” Congress stands ready to avail our affiliate its full solidarity and support if this unfortunate situation lingers.”

Although the Congress said it needed businesses, especially media businesses that perform the dual role of employment and watchdog, the NLC said it found it a sad irony that these media organizations, which have been in the forefront of the popular struggle for the enforcement of the social contract between the state and the citizenry, would default in exercising a basic and fundamental obligation to their employees.

The default, the NLC noted, is undermining the moral authority of the media houses to speak out on public issues, adding that the affected media organizations must muster all the necessary resources to pay up not just these salary arrears, but subsequent salaries as they fall due.

“The notion by some of the proprietors that the possession alone of the identity card of their media organisations by the journalist is a meal ticket, is patently false and should be discarded,” the NLC said. “If they believe it is that easy, let them run the organizations from the streets themselves.”