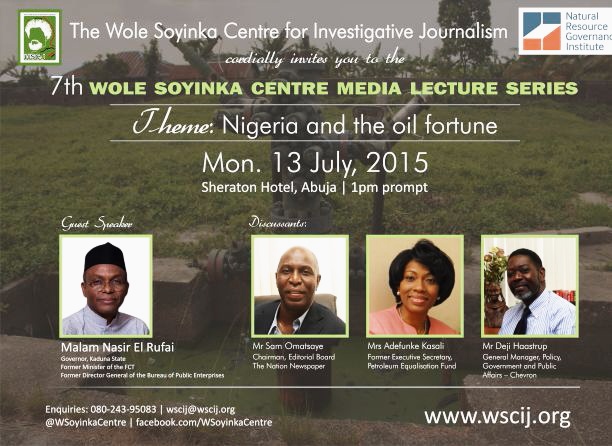 Nigeria and the oil fortune, or perhaps, misfortune, is the focus of the discussion at the Seventh Wole Soyinka Centre Media Lecture Series which holds Monday, July 13 in Abuja.

The event is scheduled for 1p.m. at the Ladi Kwali Hall of the Sheraton Hotel, Abuja.

Nasir El-Rufai, Governor of Kaduna State, and former Minister of the Federal Capital Territory and former Director General of the Bureau of Public Enterprises will speak to the theme.

The lecture this year is organised by the Wole Soyinka Centre for Investigative Journalism (WSCIJ) in collaboration with the Natural Resource Governance Institute (NRGI), Pan-Atlantic University and PREMIUM TIMES, to kick-start the partners’ Media for Oil Reform programme.

The programme, according to Motunrayo Alaka, the coordinator of the Wole Soyinka Centre, will include capacity development outreaches at various levels of the media to support the watchdog’s ability to report the sector more accurately.

The organiser’s plan is to use the lecture to contribute to strategic thinking on charting a way forward to ameliorate threats on oil as the main stay of the Nigerian economy and better define the media’s role in contributing to the much needed reforms.

The lecture, an annual programme of the WSCIJ, is designed to periodically examine varying topical issues that have a reverberating effect on the perceived performance of the media on the health of our country, Nigeria, and its democracy.

It has since 2009 held on July 13, Professor Wole Soyinka’s birthday, to honour this global icon while also drawing attention to critical national issues.

Admittance to the event is open to journalists, practitioners and pressure groups in the extractive industry, policy makers, members of the diplomatic corps, and other stakeholders in the civil society.

The Wole Soyinka Centre for Investigative Journalism (WSCIJ) is a non-governmental organisation with a vision to stimulate the emergence of a socially just community defined by the ethics of inclusion, transparency and accountability through support to journalists.

Initially known as the Wole Soyinka Investigative Reporting Award (WSIRA) at inception in 2005, the change in name became necessary in 2008 to reflect the intentions of the coordinators to embrace a more robust line of activities that have greater capacity for engendering the right values of investigative journalism in the Nigerian media.

The Centre is named after Professor Wole Soyinka in recognition of his life-long work in support of the freedom of expression, freedom to hold opinion, and freedom to impart them without fear or favour and without hindrance or interference.