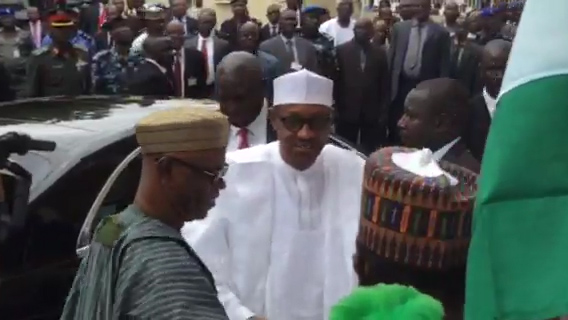 President Muhammadu Buhari has asked the All Progressives Congress members in the National Assembly to accept the supremacy of the party in order to allow democracy work in the country.

He stated this in his opening remarks at the National Executive Committee meeting of the party presently holding in Abuja.

The APC has been embroiled in crisis following the emergence of Bukola Saraki and Yakubu Dogara as Senate President and Speaker of the House of Representatives, respectively, on June 9.

The crisis deepened when the Senate rejected the party’s choices for the remaining principal offices, by adopting the nominees of the zonal caucuses of the party in the senate for the positions of majority leader, deputy majority leader and deputy chief whip.

The House, which is also sharply divided into two factions, is yet to name its principal officers.

Mr. Buhari asked the lawmakers to pocket their personal interests and put that of the APC ahead so that it would work.