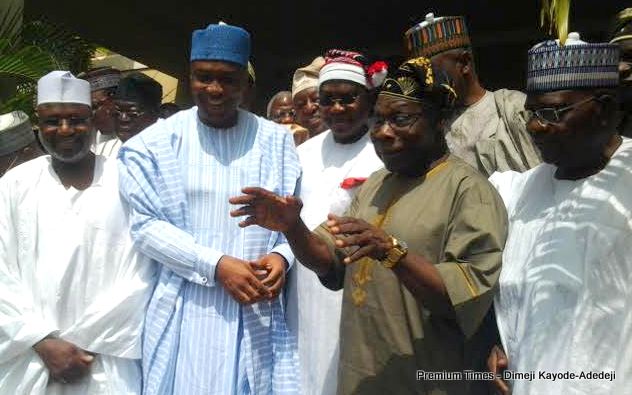 Why I visited Obasanjo – Bukola Saraki

The Senate President, Bukola Saraki, on Friday said his visit to former President Olusegun Obasanjo was to receive his blessing and consult him on how to assist him in moving the Senate and the nation forward.

Mr. Saraki made this known to journalists during an interview after his over two hours closed-door meeting with Mr. Obasanjo at his Hilltop home in Abeokuta, the Ogun state capital.

The senate president said he and members of his delegation also came to tap from Mr. Obasanjo’s wisdom and knowledge.

“I’m here with some of my colleagues,” Mr. Saraki said. “Since I’ve been the Senate President, as one of our fathers, the former president, we are here to pay our homage to him, to seek his advice, to get his blessing and also to consult.

“We all know President Obasanjo’s value to this country and we are here to tap from his wisdom, knowledge and experience.”

Mr. Saraki did not say the kind of consultation he held with Mr. Obasanjo but PREMIUM TIMES had earlier reported Mr. Saraki as lamenting that his relationship with his party and the president remained soured, 10 days after he was elected senate president.

He therefore requested the former president to step in to help in the reconciliation process.

When reporters asked him how he was sorting out his differences with his party, he said, “As you can see, things are moving smoothly. Definitely, be rest assured that all that would be put behind us very shortly. We are very confident about this.”

Speaking on the calls for a downward review of Nigerian lawmakers’ salaries and allowances, Mr. Saraki said, “Well, I think already that is in progress. If you remember last time, it was about N150billion and it’s coming down to N120billion.‎

“I think the situation in the country deserves that every public servant must make sacrifices and whatever sacrifice that is necessary, we will do it.

“And that is being done. So, be rest assured that we are sensitive, we are aware of the situation in the country and if we are going to lead, we must lead by example. And we would do that.”