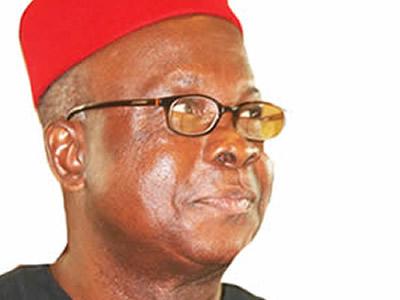 A former governor of Ebonyi State, Martin Elechi, has been quizzed by the Economic and Financial Crimes Commission, EFCC, over alleged corruption, PREMIUM TIMES has learnt.

Mr. Elechi arrived at the commission’s office in Abuja at 10 a.m. on Tuesday following an invitation sent by the EFCC two weeks ago.

A source at the commission told PREMIUM TIMES that, “while Mr. Elechi could not honour the EFCC’s invitation, his lawyer wrote informing the anti-graft agency that his client was not available at the time he was expected but would appear today for questioning”.

On January 29, the EFCC had also quizzed the former governor’s son, Elechi Nnanna Elechi, over allegations of fraud.

The younger Elechi was alleged to be the face of the family’s company – profiting from state and local governments contracts that have remained unexecuted.

The former governor who left office on May 29 after his second term, could not face the anti-graft agency earlier since he had constitutional immunity against prosecution.

The EFCC had also quizzed the permanent secretary of the state Ministry of Works, Cornelius Onwe, as well as the state’s Accountant General, Edwin Igbele; Commissioner for Finance, Timothy Ogbonnaya Odaa; and Commissioner for Local government and Chieftaincy Matters, Cele Nwali.

They were all fingered in allegations of fraud regarding an Asphalt Project earmarked for the 13 local government of the state by the former governor’s administration for which money running into millions of naira was deducted at source, from local government accounts.

One die as SSS, Police rescue Regent, others in Ondo