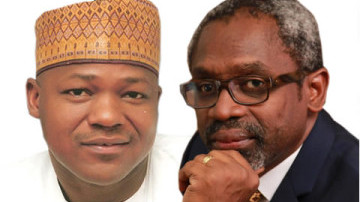 ANALYSIS: Gbajabiamila or Dogara: Who leads the 8th Session of the House of Representatives?

The 360-member House of Representatives will on Tuesday undertake its first legislative business of the 8th Assembly, which is electing its principal officers.

For the position of Speaker, barring any circumstance of withdrawal or indication of interest, two ranking members Femi Gbajabiamila, Lagos State, and Yakubu Dogara, Bauchi State, will slug it out on the floor of the Green Chamber.

While Mr. Gbajabiamila represents Surulere 1 federal Constituency of Lagos State, Mr. Dogara represents the Bogoro/Dass/Tafawa Balewa federal constituency of Bauchi State. Both are ranking lawmakers who had held several positions in the House.

In the last 48 hours, several moves by the party aimed at presenting a common candidate failed. Supporters of Mr. Dogara in particular rebuffed a meeting convened by Vice President Yemi Osinbajo to resolve the contending issues on the choice of the presiding officers of the National Assembly.

Femi Gbajabiamila: He is in his fourth term in the House, having been first elected in 2003 on the platform of the Alliance for Democracy. A lawyer, 54-year old Gbajabiamila had previously occupied leadership positions in the House, namely Minority Whip and Minority Leader. If elected, Mr. Gbajabiamila is expected to bring his rich legislative experience to bear in leading the House and bringing stability to it.

Mr. Gbajabiamila enjoys wide support from his colleagues-lawmakers. He is mostly favoured by APC legislators-elect, including those of northern extraction where his opponent hails from. At present, he is believed to have on his side about 80 per cent of the APC lawmakers. If opinions expressed by members-elect and caucuses of the party are anything to go by, he will carry the day. This is not unexpected having been the arrowhead of opposition in the House.

Another advantage Mr. Gbajabiamila is coming with is that of the backing of the party. On Saturday, the lawmaker was adopted as the party’s official candidate for the Speakership seat after polling 154 votes to Mr. Dogara’s three in a mock election organised by the APC leadership. In that election however, Mr. Dogara’s supporters boycotted the election as he walked out with about 15 of them.

However, it will not be an easy ride for the Lagos-born lawmaker. First, some of his colleagues have claimed he is arrogant.

Second, the opposing camp is also alleging that Mr. Gbajabiamila is being propped by a national leader of the APC, Bola Tinubu, a former governor of Lagos State. Members of the camp claim that should he emerge Speaker, the House would entirely be in the pocket of the former governor. They are quick to point out that since the vice president, Yemi Osinbajo, is a protégé of Mr. Tibunu, it will be wrong for another of the former governor’s protégé to pick the Speakership slot.

Yet, the opposing camp has argued that though the zoning arrangement has been discarded by the party hierarchy, it will be out of place to allow the South West produce vice president and the Speaker. However, Mr. Gbajabiamila backers are quick to point to the out-gone dispensation where former vice president Namadi Sambo and former Speaker, Aminu Tambuwal hail from the same North West zone. They also recalled that former Deputy Senate President and Deputy Speaker, Emeka Ihedioha, are both from the South East zone. For them, such situations obtain sometimes in politics and allocation of offices.

As of Tuesday morning, what seems to be Mr. Gbajabiamila’s biggest disadvantage is the decision of the opposition Peoples Democratic Party, PDP, to adopt Mr. Dogara as its candidate and ask its members to vote that way. The PDP commands a significant membership in the house.

Yakubu Dogara: Like his opponent, Mr. Dogara, a 49-year-old lawyer, is a ranking lawmaker. He was elected into the House in 2007. He has occupied chairmanship positions, including those of Customs and Excise and House Services Committees. Mr. Dogara is a dogged and outspoken lawmaker who will bring his wealth of experience if elected Speaker of the 8th Assembly.

Apart from his rich experience in lawmaking, a major strength of the candidate is his place of origin. Mr. Dogara hails from the North east zone which is favoured to produce either the Speaker or the Senate President. Several of the colleagues in the House have queued up behind him to realize his ambition.

Another major advantage for the Bauchi-born legislator is his alleged backing by the immediate past leadership of the House. Having served as the Chairman of the House Services Committee, the Aminu Tambuwal leadership reportedly found him suitable to sustain their legacy.

Mr. Dogara received a major boost for his ambition recently when one of the main contenders for the position, Jubril Abduminunini, stepped down for him. Mr. Abdulmunini hails from the North Western zone which has the highest number of lawmakers in the House.

Mr. Dogara’s biggest boost came Tuesday morning with the PDP rooting for him and asking its members to vote for the lawmaker.

However, a major minus for Mr. Dogara is perceived confrontation with the leadership of the party. This particularly came to the fore when he walked out with some of his supporters at last Saturday’s mocked election.

The lawmaker had reportedly walked out of the venue of the election in Abuja with about 15 of his supporters in protest of the plan by the party to conduct a straw election to pick its choice for the Speakership seat. His group of supporters – 8th Assembly Consolidation Group – strongly condemned the election in a statement and vowed to defy the party’s directive not to participate in the Tuesday election in the chambers.

Again, the role he allegedly played in stopping Mr. Tambuwal from becoming Speaker in 2011 appears to be hunting Mr. Dogara. In that year, he had instituted a suit in an Abuja High Court against Mr. Tambuwal to stop him from becoming the Speaker. A group, House Democracy Defenders said in an advertorial that “To avoid his being apprehended following the issuance of arrest warrant on him by an Abuja High Court as instigated by Hon Yakubu Dogara, we vividly recall how our former Speaker disguised with a bowler hat sandwiched around comrades as we were being driven in a bus to the national Assembly for the promulgation of the 7th Assembly and the election of Speaker.” Although Mr. Tambuwal made up with Mr. Dogara, some members are said not to have forgotten the latter’s action.

Despite their strength and weaknesses, it is becoming almost certain the PDP holds the aces in deciding who emerges between Messrs Dogara and Gbajabiamila unless a surprising action is taken by either camps.

If Dogara does not step down in deference to the leadership of APC, he is able to retain the loyalty of his APC supporters; and get a united support from PDP, he may become the Speaker of the 8th Assembly, thereby humiliating his party leadership.

For Gbajabiamiala, with support from most of the APC legislators-elect, his fortune lies in ensuring PDP does not give a united support to Dogara.