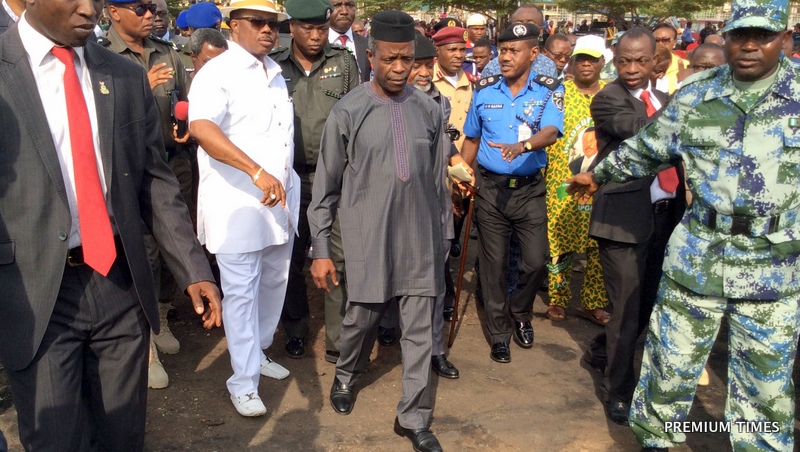 The Vice President said President Buhari felt it was not enough to send a condolence message.

Vice President Yemi Osinbajo on Wednesday commiserated with the people and government of Anambra over the fuel tanker accident, which claimed over 40 lives at Upper Iweka in Onitsha.

Mr. Osinbajo, who visited the scene of the accident and the injured at Toronto Hospital on Wednesday, said President Muhammadu Buhari was very concerned and pained by the incident.

He said the president felt it was not enough to send a condolence message and as such asked him to go and commiserate with the people.

“Every Nigerian citizen matters to the Federal Government no matter his status or where he resides.

“Mr President asked me to come and first commiserate with Gov. Willie Obiano and Anambra people.

“He was very concerned that he felt it was not enough to issue condolence message and so asked me to come and commiserate with the people.

“I have been taken round to see the heroic action of the hospital staff and those involved in emergency.

“Unfortunately, many lost their lives but some have seen today and are responding to treatment,’’ he said.

Mr. Osinbajo told a crowd that gathered around Upper Iweka, scene of the accident, that he had been discussing with Gov. Obiano on possible ways the Federal Government and Anambra Government could cooperate to forestall further accident.

He commended Mr. Obiano for undertaking to settle the hospital bills of the victims.

Earlier, while briefing the vice-president, Mr. Obiano said the Anambra Government had banned long trucks and petrol tankers from plying roads in Anambra during the day.

The governor said the government had banned heavy duty vehicles from plying state roads, adding that they must trans-load their cargoes on getting to state roads.

According to him, the materials used in constructing state roads are not the same as the ones used in building federal roads and each time heavy duty trucks ply state roads, they cause heavy damage on them. (NAN)