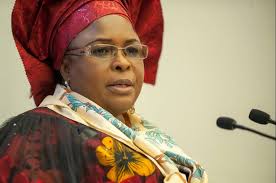 Patience Jonathan opens up: How I had surgery during campaign, moved out of Aso Rock

The First Lady, Patience Jonathan, on Sunday admitted that she sneaked out of Nigeria for a major surgery in January during her husband’s presidential campaign.

Mrs. Jonathan, who did not disclose the kind of surgery she had,said her health deteriorated a lot during her husband’s re-election campaign, ascribing the illness to ‘satan.’

“That campaigning time was a trial for me. Satan came in again and those that know the former president and his wife, her corpse was carried out of this place. We thank God that I and my husband are going alive,” she said in apparent reference to Olusegun Obasanjo, whose wife Stella died while he was in office as president.

“This campaign period, devil struck and came in again. In pains I was rushed to the hospital in January and the doctors told me, mama you have to go for major big operation now now. What again! the campaign was still going on and I wondered how were we going to explain to Nigerians.

“You know even when you go for check-up, they will be writing on papers saying all sorts of things. My husband will continue with his campaign crowd until the last day,” she said in reference to media reports of her health.

“That was how I went in for the first major operation in January ending. And by God’s grace I went for the operation and came out and it was from that operation that I went to the campaign ground,” Mrs. Jonathan added.

The first lady made the statements on Sunday while speaking during a farewell church service organised in honour of President Goodluck Jonathan’s family at the Aso Villa Chapel. She and presidential aides had denied reports that she went for surgery during the campaigns, something common in Nigeria where public officials make their health concerns secret even when they are flown abroad for treatment at the public’s expense.

Mrs. Jonathan said after the first operation, she was told she needed another one.

“And they told me mama, there is another bigger operation that you have to go in for. This one would not be in this hospital. It is too small for this type of operation. You have to go to a bigger hospital and I said ah ha,” she said, adding that two years ago when she was sick, she underwent 12 surgery’s in a space of one month.

She said the second surgery was later cancelled after doctors realised there was no need for it.

“I called my pastor to continue praying for me. They want me to be a sacrifice, but I will never be.

“Then, do you know I went to the bigger hospital. I booked for the operation and I was asked to go for the campaign. They gave me a new date. I had paid for everything remaining just to enter the theatre and the thing occurred to the hospital. Let’s check her again. By then, my husband had lost the election. I have packed out of Villa, we are about going. Behold! I went to four hospitals again and the thing had vanished. My doctors were surprised they didn’t think that could happen,” she said.

Mrs. Jonathan’s admission that she packed out of the villa after her husband’s loss in the polls also contradicts her earlier claim after the media reported her moving out. She had then claimed the story to be false.

The outgoing president’s wife thanked God for her family saying she never anticipated becoming the First Lady of a state or of Nigeria.

“I never thought in my life that I will be first lady. I never even dreamt of being wife of a deputy governor because my husband was not a politician. But God made it possible and God lifted us up from deputy governor and here we are,” she said.

The event was attended by several ministers, lawmakers and other public officials.

My wife is model in my heart – Oshiomhole