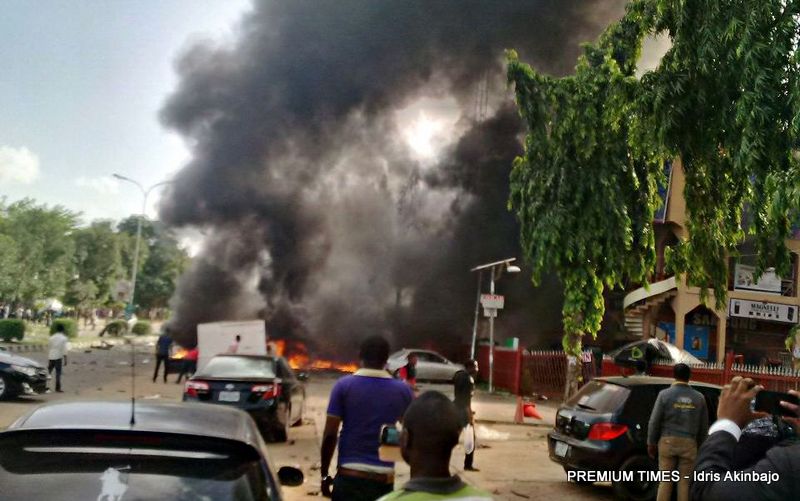 Victims of multiple bomb attacks in Abuja in 2014 on Wednesday staged a peaceful protest at the National Assembly to urge the Nigerian government to fulfil its promises to them.

The government had promised to foot the medical bills of the victims of the April 14 and June 25, 2014, blasts in Abuja.

The first blast occurred at the busy Nyanya motor park, and killed more than 75 people.

Survivors of the attacks said the government did nothing to help them as promised many months after.

The victims converged on the premises of the National Assembly, with placards bearing different inscriptions.

Some of the victims said they could not continue with their treatments in the hospitals.

The Coordinator of the group, Arthur Vav, said they wanted the Federal Government to reopen their medical files in the hospitals for follow-up treatments.

Mr. Vav said most of the victims had undergone series of surgical operations, while some still had sharp objects lodged in their bodies that needed to be removed but could not afford the cost of treatment.

“The last bomb blast was June 25 which would be one year next month, while Nyanya already was one year April 14, since then we have been paying most of our medical bills.

“The government paid some bills for us but I strongly believe there are supposed to be a follow-ups after you have been discharged from the hospital.

“This is because when you get back to your house, you find out some sharp objects in the body and you discover you still need some medical treatment,” he said.

Mr. Vav said the group had written to the Federal Capital Development Authority (FCDA), the President of the Senate and the Secretary to the Government of the Federation, but received no response.

He said the peaceful demonstration was to express their grievances.

“We have been neglected by the government because for one year now nothing has been done,” he said.

Thomas Aduche, another member of the group, said they were left to fate without any support from the government.

Mr. Aduche said he paid for the last operation carried out on his neck and pleaded with the government to empower them as most of them had lost their jobs.

Two women who lost their husbands, Favour Ndubuisi and Sarah Andy, called on government to empower them to enable them to take care of their children.

“I am a qualified teacher but due to the lack of job I teach in private school where the salary is very small; if government will employ me, I will be happy,’’ Mrs. Ndubuisi said.

No lawmaker addressed the protesters.

Victor Dike, representing the Sergeant-At-Arms for the Senate, who addressed the group promised to look into their case.

Mr. Dike said the group wrote a letter to the Senate last two weeks and did not follow up to know the outcome.

“I promise to look for the solution to their problem through the letter they submitted and once we get the letter I will tell them the action they have taken on the letter and that is the normal procedure.

“They just submitted their letter two or three weeks ago and have not followed up the letter only to come for demonstration, it is not okay,’’ he said. (NAN)