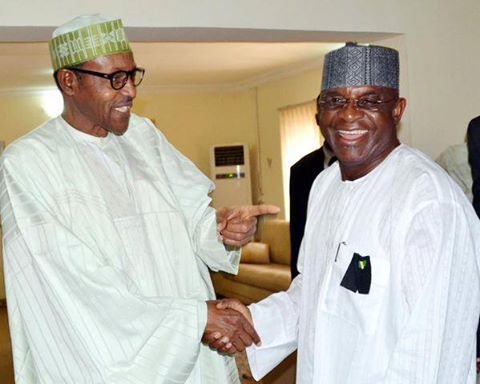 The Senate President, David Mark, on Thursday had a closed-door meeting with President-elect, Muhammadu Buhari, in Abuja.

The meeting, which held at the All Progressives Congress Presidential Campaign office, lasted about 30 minutes.

Mr. Mark was accompanied by some of his aides.

It was not clear what the duo discussed, but sources said their discussion centred on the issues of governance.

Kola Ologbondiyan, the Special Adviser to the Senate President, told PREMIUM TIMES that he was not aware of the specific issues discussed.

He could not also say if the meeting was at the instance of Mr. Buhari or Mr. Mark.

When also contacted, a media officer in the APC Campaign Office, Paul Ibe, also said he did not know what the two leaders discussed.

He said it must have been “the normal discussions on governance”.

The Senate President won re-election to represent Benue South Senatorial District on the platform of the Peoples Democratic Party.

He will be leaving the office in June after eight years to pave way for an APC senator to assume office since the party (APC) will form majority in the upper legislative chamber.

Mr. Mark had recently vowed not to dump the PDP, which lost power at the centre in the March 28 presidential election to the opposition All Progressives Congress.

Mr. Buhari defeated President Goodluck Jonathan of the PDP in the election.

The Senate President has since vowed not to defect to the APC, saying he would prefer to remain in the PDP even if he is the last man standing.

“Before I go and sit down I have heard by way of rumour to start with in the social media that I am decamping to APC. Social media is awash with that. If I will be the last man standing I will remain in PDP,” Mr. Mark said at a church service to mark his 67th birthday anniversary earlier this month.

“The rumour is just an unnecessary fabrication and I even heard that one of the papers yesterday had it as headline. The media men must please make sure they investigate cases before they begin to publish it.

“Nobody has spoken to me from APC. I have no reasons whatsoever to leave PDP, no reasons. I have risen to where I am on the platform of PDP. PDP has a manifesto and I believe in it.”

Mr. Mark said he would remain in the ruling party to “try to restructure PDP, bring it back.

The Senate President lambasted those leaving the PDP for APC, describing them as “fair weather friends of PDP”.

He stressed, “When PDP bounces back in few years in the next couple of elections or next election they will come back again to PDP. So they will move. Those ones are not really the issues.”