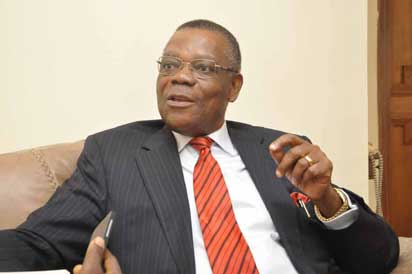 A member of the Board of Trustees of the Peoples Democratic Party, Don Etiebet, has expressed outrage over the alleged attempt by the party and the Independent National Electoral Commission to doctor the figures of the April 11 governorship election result in Akwa Ibom State.

He also faulted the declaration of the PDP’s candidate, Udom Emmanuel, as the victor in the election, saying “there was no election in Akwa Ibom”.

Media reports say the state government is working with INEC on behalf of the PDP to get enough accredited voters to match the number of votes which the Commission allegedly allocated to the party for the recent governorship, National Assembly and House of Assembly elections in the state.

According to the reports, the number of accredited voters in Akwa Ibom State during the governorship and House of Assembly elections was 647,215 whereas INEC in the state declared total votes cast for Mr. Emmanuel as 996,071, showing a differential of 348,856 or 35 percent.

But Mr. Etiebet, a former petroleum resources minister, in a telephone interview with PREMIUM TIMES on Tuesday, said the election was manipulated in favour of Mr. Emmanuel and that whatever is being done by the PDP to alter the figures is illegal and criminal.

“I can testify to the fact that the figures which INEC released cannot tally with accredited voters on the day of the election. I am saying that whatever they are doing to doctor the previous figures is illegal and criminal and whoever is doing that should be ready to answer,” he said.

Mr. Etiebet, who is a former National Chairman of the defunct All Nigeria Peoples Party, and a former PDP presidential candidate, described as “illegal” the result of the State Houses of Assembly election in Akwa Ibom published by INEC.

He argued that the Commission ought to have published the result announced at the constituencies in the evening of April 11 or in the morning of April 12.

The former minister had last week demanded the cancellation of the governorship election in the state.

He also called on the international community and the Nigerian authorities to look at what he described as deliberate and planned human rights violations of Governor Godswill Akpabio in depriving the electorate the right to vote as well as the murder of voters on the Election Day.