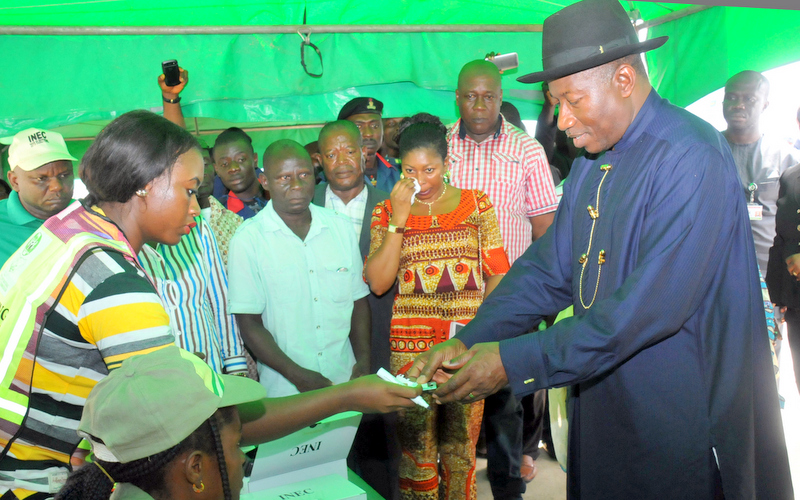 Mr. Jonathan is seeking re-election as the Presidential Candidate of the ruling Peoples Democratic Party.

Addressing journalists after voting at unit 13, Otuoke, Bayelsa State, about 3.15 p.m, Mr. Jonathan said, “I am hopeful, very hopeful” when asked if he expected to win.

Speaking against the background of challenges being experienced in some areas in respect of the use of the card readers, the President urged Nigerians not to condemn the Independent National Electoral Commission.

He said INEC wanted to use the card readers to make Nigeria elections more credible and transparent. He added that Nigerians should “sympathise” with INEC.

The president said even though he received field reports from all over the country, he would not reveal the information he got, saying it is only “Jega (the INEC Chairperson) that can speak for INEC”.

He said the Governor of Enugu State, Sullivan Chime, had called him to express worry over the card reader problem in the South-East State. He said the governor was “boiling”, but that he told him to calm down.

He also dismissed insinuations that the card readers were only not working in the PDP-controlled States.

Mr. Jonathan, his wife, Patience and mother, Eunice arrived the polling units to vote around 3.03 pm. Even though he came two hours after voting ought to start, he was allowed to vote first, just like he did during the accreditation process.