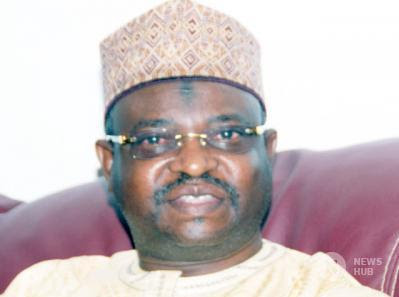 Former House of Representatives Speaker, Ghali Umar Na’Abba is set to dump the Peoples Democratic Party (PDP) for the All Progressives Congress (APC), the Daily Times has learnt.

In his resignation letter dated March 15, Mr. Na’Abba, who led the legislative chamber during the Olusegun Obasanjo presidency, accused President Goodluck Jonathan of reducing governance to a ridiculous level and splitting the country along ethnic and religious lines.

The ex-lawmaker’s letter was sent to the chairman of the PDP Sharada Ward in Kano Municipal Local Government Area and titled “Notification of Resignation from PDP, each organs and committees.”
The letter was also copied to the PDP chairman in Kano, North West Zone National Vice Chairman, National Chairman, and Chairman of the party’s Board of Trustees.

Mr. Na’Abba blamed President Jonathan and other previous leaders of the PDP, which has ruled Nigeria since 1999, of putting the country in in a bad situation.

“In the sixteen years the Party has been ruling at the center, the Party’s leadership has failed to lead by example,” he said.

He, however, had the harshest criticism for the current president, saying, “No administration has used religion and ethnicity to divide Nigerians more than the current administration under the leadership of Mr. Goodluck Jonathan.”
The former lawmaker did not state if he was joining any other party but told PREMIUM TIMES on phone that he was being lobbied by other parties to join them. His supporters in Kano, whose governor, Rabiu Kwankwaso, also dumped the PDP for the All Progressices Congress, APC, however expect the ex-lawmaker to also join the main oppostion party.
Read excerpts of his resignation letter below.

“You are no doubt aware of the abysmal level to which the leadership of our great Country under President Goodluck Jonathan and the Peoples Democratic Party have reduced governance to, as a result of which our great Party has been losing its sons and daughters including so many of its founding fathers and members by the day,” the Kano-born lawmaker stated.

“All efforts of critical members and fathers of the Party to offer advice remain always unheeded. It pains most of us that majority of the founding fathers that had died like Chief S. M. Afolabi, Alhaji Muhammad Abubakar Rimi, Chief Solomon Lar, Professor Osammor, Chief S. B. Awoniyi etc all died as a result of their frustration by and with the Party.
“Those living like Dr. Alex Ekwueme, Malam Adamu Chiroma, Dr Shettima Mustapha, Alhaji Asheikh Jarma Dr. Victor Odili, Mr. Isaac Shaahu and many others are equally living with such frustration. While others like Alhaji Atiku Abubakar, Alhaji Isyaku Ibrahim, Alhaji Musa Gwadabe, two former National Chairmen, Chief Audu Ogbe and Chief Barnabas Gemade etc had since left the Party.

“The Party and the administration clearly possess neither compassion nor empathy.

“The Country’s and the Party’s leadership have become cabalised to the extent that while Nigerians are aware that they have a President in the person of Dr. Goodluck Jonathan, they are at the same time at a loss as to who governs their Country. Both Nigeria and the PDP are left to drift. In the sixteen years the Party has been ruling at the center, the Party’s leadership has failed to lead by example.
“Instead, it has left us with the conventional wisdom that people cannot succeed in life unless they are ruthless and unprincipled. The Party has become characterized by corruption and impunity in the way and manner candidates for elective positions are being selected to the extent that in almost twenty states, crisis has engulfed the Party over the Gubernatorial primaries and the manner other candidates for other elective positions emerged.

“In short, the Party and the Country’s leadership have failed to consolidate democratic gains for sister African Countries and other transition Countries to follow. Instead, under the current leadership, Nigeria is suffering from loss of esteem, as we are now most often consigned to the back seat of international relations. Most worrisome is the current anxiety of most Nigerians as the regime wobbles and tumbles toward the oncoming election.

“It has today become incontrovertible that cartels and shady characters are becoming visible, important and indispensable factors in Nigeria’s governance. It appears those at the helm of affairs are more comfortable with such characters of easy virtue than with patriotic and altruistic Nigerians. No doubt, in our Country today, the quality of governance is going down by the day.
“Critical National Institutions that unify and wield Nigerians together have been dragged into politics, contrary to wise counsel and political correctness. No administration has used religion and ethnicity to divide Nigerians more than the current administration under the leadership of Mr. Goodluck Jonathan. The ultimate test of any leader is looking at what has remained after he is gone.
“You will agree with me that such pervasive political behavior should under no circumstances be tolerated by all who subscribe to decent and conscionable political practice. I have relentlessly pushed for reform of the internal policies of the PDP individually and collectively, without success. In fact it is common knowledge that all critical members of the Party have been made irrelevant by the Party.
“Members who are pliant and who lack principle and who stand for nothing are always more trusted by the leadership to carry out Party assignments. Such members are said to be “loyal”. Such loyalty is nothing but a euphemism for people who stand for nothing. Because no one is trusted by the leadership both at governmental and party levels, only a handful of party men and women are always entrusted with such party tasks as National Conventions, fund raising. Such men and women are now fully re circled.

“Their faces are today so familiar to the eyes of Nigerians.As a politician with political science background, it is obvious to me that PDP is both self-destruct and irredeemable. Coupled with the regimes divisive and unpatriotic disposition, Nigeria has become a bye-word for “touch and go”, if examples of contemporary nations are anything to go by. The challenge before Nigerians today, in order to secure a new lease of life therefore, is how to get out this inept leadership that has neither allure nor inspiration.

“In its place, Nigerians deserve not just a good President, good governors , and other political office holders, but true and exemplary leaders. And within this context, leadership that is more truly both transactional and transformative and which have more competence and capacity to govern. Nigeria needs leaders with a clear vision for the future. Leaders that will lead not from the back, side or front but from within. Leaders that will provide courageous and moral leadership the dearth of which has led to the weakening of political and economic institutions throughout Nigeria.
“For the above and many reasons, effective today 15th March 2015, I hereby tender my resignation from the Peoples Democratic Party, it’s organs including the Board of Trustees and all other committees to which I belong at National and State levels.

“I pray that your mind and those of other Patriots would also be illuminated with truth so that you may also act wisely and accordingly. This comes with the renewed assurances of my highest consideration and personal respect”.