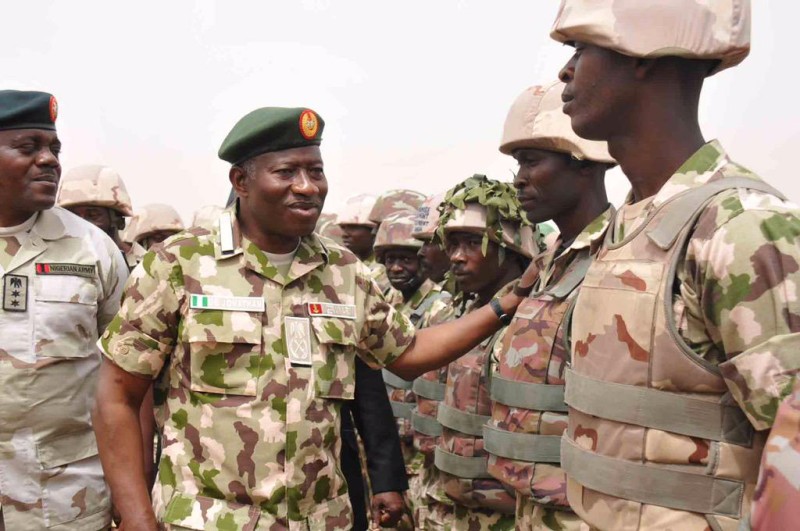 President Goodluck Jonathan Thursday in Mubi, Adamawa State and Baga, Borno State applauded Nigerian troops for proving their mettle once again through the rapid recapture of territories formerly held by insurgents in the country’s North-Eastern states.

He assured the soldiers that they wouldl be duly rewarded for their bravery and patriotic service to the nation at the successful conclusion of ongoing operations against Boko Haram.

Addressing officers and men of the Nigerian Army in both towns, which were recently recaptured from Boko Haram, President Jonathan declared that he and all Nigerians were very proud of the bravery, competence and patriotism with which they were now undertaking operations to expel the insurgents from all parts of Borno, Yobe and Adamawa states.

The President said that with their recent successes, which have overwhelmingly turned the tide against Boko Haram, the Nigerian military has proven beyond any doubt that it remains fully capable of defending the territorial integrity of Nigeria.

The military’s recent victories against Boko Haram, President Jonathan told the troops, have also proven conclusively that all those, within and outside the country, who cast aspersions on Nigerian soldiers and questioned their ability and willingness to overcome the insurgents were misinformed and wrong.

Mr. Jonathan, who was accompanied on the trip by the National Security Adviser, Sambo Dasuki and all the Service Chiefs, assured the troops that the Federal Government would ensure they received all the equipment and logistics they require to complete the ongoing mission to reassert government’s effective control over all areas formerly held by Boko Haram.

The President promised the soldiers that all issues pertaining to their welfare will be properly and expeditiously addressed.

Families of soldiers who had sadly lost their lives in battles against Boko Haram would also be well provided for, the President further assured the troops.

The soldiers responded to the President’s address with chants of “Never Again” and assured him that insurgents and terrorists will never again be allowed to take and hold any Nigerian territory.

While in Mubi, President Jonathan, accompanied by the Governor of Adamawa State, Bala Ngilari and the Minister of Youth Development, Bonnie Haruna, paid a courtesy call on the Emir, Isa Ahmadu.

He assured the Emir that the Federal Government would do all within its powers to ensure that normalcy was speedily returned to Mubi and other towns and settlements recently recaptured from Boko Haram to enable displaced persons return to their homes in the shortest possible time.

President Jonathan also undertook an aerial inspection of other towns and areas recently recaptured from Boko Haram including Monguno.

Before returning to Abuja, the President met and conferred with the Borno State Governor, Kashim Shettima, in Maiduguri.