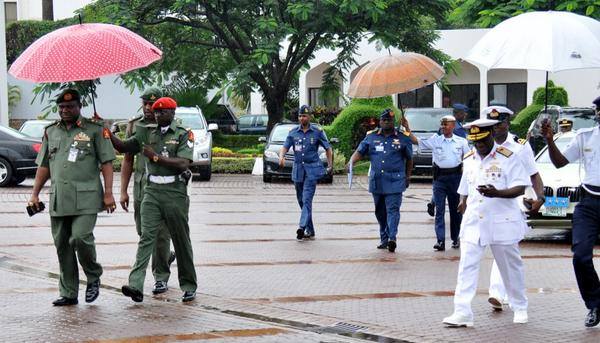 INEC, military meet ahead of elections

The Independent National Electoral Commission, INEC, met with the nation’s security agencies Monday ahead of the rescheduled elections in March and April.

The meeting, under the Interagency Consultative Committee on Election Security, held at the electoral body’s office in Abuja.

The committee is a multi-agency platform for INEC and Nigerian security agencies, established to review and manage security issues concerning the electoral process in the country.

The Nigerian military drew public attention over the 2015 election early February, after it compelled INEC to shift the polls from their initial dates.

The military said it could not guarantee security for the polls on February 14 and 28 as it would be kicking off new operations against the insurgent group, Boko Haram.

There are concerns the elections may still be rescheduled at the expiration of the six-week extension.

President Goodluck Jonathan has, however, repeatedly assured elections would hold as scheduled by INEC.

Kayode Idowu, the Chief Press Secretary to INEC chairman, Attahiru Jega, who confirmed the meeting to PREMIUM TIMES, however, said the issue of further postponement of elections was not discussed, stating it does not fall within the purview of the committee, ICCES.

“ICCES meeting is a technical issue and a routine operational one. The issue of postponement of elections is on the policy level,” he said.

He said the meeting was “ a routine operational one to review security threat and for risk assessment by different agencies as far as elections are concerned”.

He said INEC is prepared to conduct free, fair and credible elections.