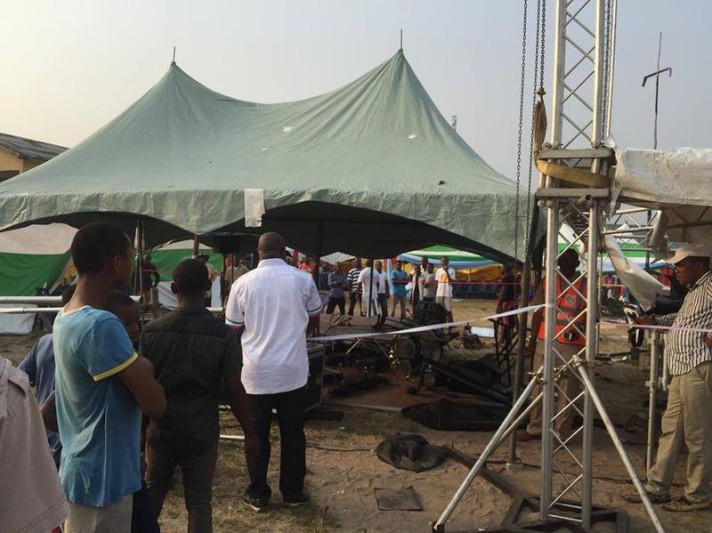 The Rivers State Police command has confirmed the killing of a policeman during the shootings which disrupted the All Progressives Congress rally in Okirika home of Nigeria’s First Lady, Patience Jonathan.

The command’s spokesperson, Ahmad Muhammad, in a statement on Tuesday said gunmen opened fire at the Okirika National School, venue of the APC rally.

During the sporadic shootings, he said a policeman drafted to secure the venue of the rally was killed while many other people were injured including a Channels Television reporter.

“The Rivers State Police Command wishes to confirm that at about 1430 hours, at National School Field, Okrika, All Progressives Congress gubernatorial rally arena was disrupted with sporadic shootings from a far distance by unknown and unpatriotic elements,” Mr. Muhammad said.

“It took the instantaneous efforts by policemen massively deployed to secure the arena to repel the assailants and save the situation.

“Preliminary details indicated a policeman engaged in the operation lost his life and three others got injured from a stray bullets and a journalist was also stabbed.”

The police, however, insisted that nothing happened to any of the APC stalwarts as they were safely evacuated by the police.

Mr. Muhammad further noted that the area is now calm while discreet investigation into the shootings has in earnest commenced.

While the command is determined to discharge its constitutional duty of protecting life and property, Mr. Muhammad advised the citizens of the state to be law abiding eschew violence in all its ramifications before, during and after general elections.

“The Command is determined to enforce law and order, provide adequate security for all political parties and ensure that the full wrath of the law is visited on any person(s) who dare and wish to test our capability,” he said.

No matter what, Obasanjo remains our father in PDP — Governor Lamido