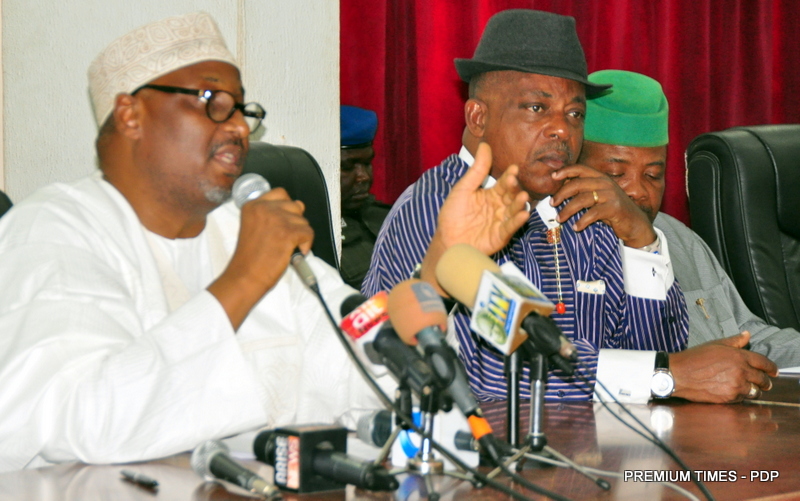 The ruling Peoples Democratic Party has advised the Independent National Electoral Commission to take advantage of the six weeks extension following the postponement of the country’s general elections to put its house in order.
Speaking at a press conference at party’s national secretariat in Abuja on Thursday, the PDP National Chairman, Adamu Muazu, said the party was also affected by the poll shift and could, therefore, not have been responsible for it.

The INEC chairman, Attahiru Jega, while announcing the rescheduling of the elections by six weeks, said the shift followed a correspondence from the office of the National Security Adviser, Sambo Dasuki, saying security agencies would be engaged in special operations in the Northeast and would not be able to provide adequate security for the polls at their original dates.

Mr. Jega said INEC on its part was ready for the February 14 and 28 elections.

“Although we tend to agree with INEC on the security reasons given for the postponement, we are nevertheless not unmindful of the fact that the commission on its own part was not fully prepared for the February 14 election date,” he said.

“Taking the INEC Chairman, Prof. Attahiru Jega, on his own words, for the 68.8 million registered voters, the commission had only printed and delivered 66.3 million Permanent Voter Cards (PVCs) with 1.3 million yet to be delivered and 1.1 million stolen cards yet to be replaced.”

The PDP chairman also recalled Mr. Jega saying that 45.09 million voters cards were collected by prospective voters representing 65.8 per cent of the registered voters and 23.71 million PVCs, representing 34.2 per cent, were yet to be collected as at February 7, which was exactly one week to the February 14 earlier scheduled date.

“Compare this anomaly with the 2011 elections where not a single eligible voter was disenfranchised,” Mr. Muazu said. “By this account, INEC could not sincerely claim to have been fully prepared for a desirable credible, free and fair election at the time when more than 23 million registered voters were going to be disenfranchised.”

Mr. Muazu therefore advised the electoral umpire to use the time provided by the extension to be fully ready for the polls.

“We therefore want to use this forum to urge INEC to use the period of the shift to ensure that it put its house in order and bequeath to Nigerians the desired free, fair and credible elections,” he said.

Mr. Muazu said contrary to the claims by the opposition APC that the PDP engineered the shift because it was heading to failure, he said his party’s’ candidate, President Jonathan, was already heading to victory.

“In the course of our campaign, we discovered that the popularity of our party is soaring, going by the rousing reception we received from Nigerians,” he said.

“While we were cruising in the euphoria of the success of our campaign that was leading us to victory, INEC on February 7, 2015, relying on section 26 (1) of the Electoral Act 2010 (As Amended) announced the postponement of the elections by six weeks, citing what it called security challenges.

“The truth is that the postponement has in no way whatsoever conferred any particular advantage to our party and our candidates. Instead, it came with an attendant loss of time and resources and delayed our celebrations of electoral victory, which with the support of Nigerians, we would have started savoring by Saturday.”

Mr. Muazu called on the APC to also take advantage of the shift to engage in “a neat and positive campaign devoid of lies, propaganda and incendiary statements”.

On its part, the PDP, Mr. Muazu said, will use the next six weeks to continue to patriotically engage in issue-based discussions with Nigerians on its values, manifesto and roadmap for a more prosperous future ahead of the March 28 and April 11 rescheduled dates.

“Our confidence for victory is derived from the fact that we have an array of very credible candidates, which Nigerians are eager to vote for. Also, our standard bearer, President Goodluck Jonathan, with his humility, performance and verifiable record of achievements has stood himself out as the leader best suited for our country at this point in our national life.

“For the opposition, we urge them to embrace positive politics by ensuring that its campaign and utterances are such that will help in deepening our democracy. This country belongs to all of us and its unity, stability and prosperity remain our paramount agenda,” he said.