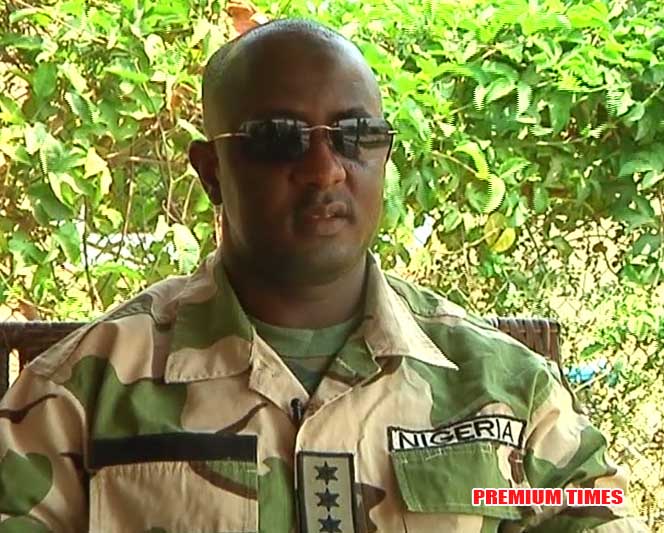 Sagir Koli, the Nigerian Army Captain, who exposed the planning and rigging of the 2014 governorship election in Ekiti State by top government officials and the military, has given details of how his younger brother was arrested and tortured at a military facility in Ibadan, Oyo state, after he fled the country.

In a video made available to PREMIUM TIMES on Monday, Mr. Koli said 15-year old Adamu Koli, who lived with him before his escape, was arrested in his house in Akure, Ondo state where he was serving.

“He was staying with me and was attending Army Children School in the Barracks, they went for him after they learnt I have left.

“When he was released, he told the family that he was chained, handcuffed and starved of food. According to him he was fed once, or twice at times often with the kind of food he was not used to,” he said.

Captain Koli also revealed that as a result of what he went through, the young Koli became sick.

“They took him to the Hospital, and doctors said he was ulceric,” he said.

Also, in a petition to the chairman of the National Human Rights Commission, a copy of which was made available to PREMIUM TIMES, lawyers to the Koli family said the young man was chained to his bed even while in hospital.

The lawyers, J. Akin Ajayi and Associates, said the younger Koli was detained at the Military Hospital within Adekunle Fajuyi cantonment in Ibadan.

They said as solicitors to the Koli family, they undertook a trip to Ibadan with a member of the Koli family to verify the whereabouts of the boy and ascertain his state of being.

“At Fajuyi cantonment, we were denied access to the young man in the cantonment in spite of showing them his passport photographs and narrating the relationship between the young man and the officer in whose custody he has been,” they said.

Although Adamu Koli has been released at present, the lawyers in the petition, written on November 15 last year, pointed out that it was wrong for the military authorities to transfer their anger with Captain Koli to his younger brother.

The chairman of the National Human Rights Commission, Chidi Odinkalu, could not immediately confirm whether it was the commission’s efforts, based on the petition by his family lawyers, that led to the release of the boy.

The video, leaked by Captain Koli, revealed how some Peoples Democratic Party’s chieftains connived with security agencies to rig the gubernatorial election in Ekiti State.

At the meeting, as evidenced by the recording, prominent officials of the PDP were heard discussing strategies for rigging the election, a poll in which the party eventually won by a landslide.

But some of the actors, including Musiliu Obanikoro, a former defence minister, and Ayo Fayose, who defeated the incumbent governor, denied being party to the plot to rig the election and questioned the authenticity of the recording.

Despite their denials, the Minister of Police Affairs, Jelili Adesiyan, who also attended the meeting, confirmed Sunday that the tape was authentic.

He however disagreed with the context of the discussion, saying the meeting was never about plans to rig the election.