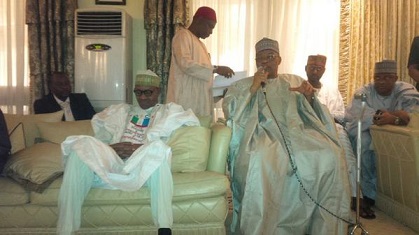 Speaking while receiving Mr. Buhari who visited him in Minna, Mr. Babangida said ‘’all of us will support you in this course to salvage this country’’.

He said that the APC candidate’s doggedness in sacrificing to salvage Nigeria would not be lost.

“I wish to congratulate members of the party for the honour of nominating my colleague, Gen. Muhammadu Buhari, as your presidential candidate in 2015 elections,” he said.

He said that he and Mr. Buhari fought the battle to keep Nigeria indivisible, adding that such traits were attributes of patriots.

Earlier, Mr. Buhari said that the APC would commence a salvation crusade in Niger, adding that the calibre of people in APC in the state was a testimony.

He thanked Mr. Babangida for the support and camaraderie he had enjoyed over the years and assured him that Nigeria was on the verge of change.

He said APC was set to take over the state with the calibre of the candidates presented for various offices and the quality of those that decamped from the ruling PDP.

Mr. Babangida had on December 27 called for support for President Goodluck Jonathan when the president visited him in Minna.

Anybody who means well for this country should support the President to make sure that Nigeria survives as a united country,” he had said.