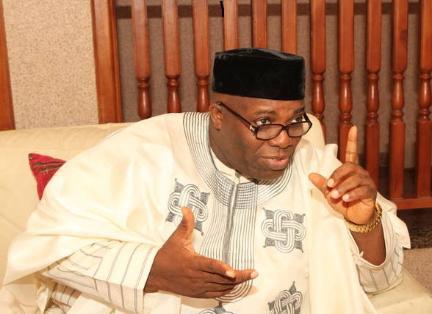 The presidency has denied that it would not hand over to Muhammadu Buhari if the opposition candidate is elected in next month’s election.
Mr. Buhari’s campaign office had on Saturday issued a statement saying an official in the office of the President’s Senior Special Assistant on Public Affairs, Doyin Okupe, posted the message on his social media platforms.
“The Blackberry Messenger (BBM) statement by Deji Adeyanju, an official in the Office of the Senior Special Assistant to the President on Public Affairs, Doyin Okupe, said ‘Buhari can never be President of Nigeria. Quote me any day any time. Instead of Buhari to become President of Nigeria, Nigeria would rather break. A military coup will even be allowed than for Buhari to become the president of a democratic Nigeria quote me any day, any time,” Buhari’s campaign said in the statement by Garba Shehu, its spokesperson.
Mr. Okupe’s office said the claim by the Buhari campaign is false.
In a statement, Sunday, signed by Bamidele Salam, the presidency said “we categorically deny that this statement was ever made by anyone in this office.
“The APC claim is absolutely false, mischievous and malicious,” it said.
Although, the Buhari campaign said the alleged statements were posted on Facebook and Blackberry Messenger, the presidency made no reference to the two platforms.
It however, said Mr. Okupe “personally handles his Twitter, @doyinokupe and other social Media platforms and continues to use such as a legitimate medium of advancing the cause of democratic good governance and institutional integrity which President Goodluck Ebele Jonathan represents”.

It also said Mr. Okupe has never and will never associate himself with thoughts or actions which run contrary to the tenets of democracy, rule of law and the right of Nigerians to freely elect those who govern them.

“We urge the APC to concentrate and work more on clearing the name of its Presidential candidate from the mess of not having perquisite academic certificates and incapacity to govern Nigeria rather than seek a cheap diversion from a phantom post by some persons on the Social Media.

“We remain committed to running campaigns based on those issues which are pertinent to the growth and stability of the Nigerian nation and will not condescend to the known antics of the opposition party in blackmail, falsehood and crass opportunism,” it said.

Also, in a separate statement by the APC spokesperson, Lai Mohammed, the party said it will neither accept an interim government nor a postponement of next month’s elections.

Mr. Mohammed warned that any attempt to scuttle the polls in preference for any other arrangement will be resisted by all available constitutional means.

”We are aware that those who are not comfortable with the turning of the political tide in favour of the opposition ahead of the elections are scheming to abort a possible victory for our party, through either an interim government or a postponement of the elections.

”These enemies of Nigeria include those who are worried by the strong anti-corruption stance of our party and its avowed commitment to good governance, and those who favour the status quo of anything goes, bad governance and massive corruption that have left Nigerians deeply pauperized and traumatized,” he said, while making reference to the alleged claim of Mr. Okupe’s aide.

”Our stand is simple but needs to be restated,” the APC said.
“The 2015 general elections must hold as scheduled all over Nigeria, and our party is ready for the elections. As we stated earlier, we will only accept the outcome of a free, fair, credible and transparent elections, not that of manipulated polls. We will also not agree to the postponement of next month’s elections under any guise, and an interim arrangement plot is totally unacceptable to us. We challenge the ruling PDP to also state its own stand on next month’s polls for the world to note.

”We also challenge the presidency to state its own stand and to also distance itself from the anarchic and treasonable statement by one of its own over the forthcoming polls.”