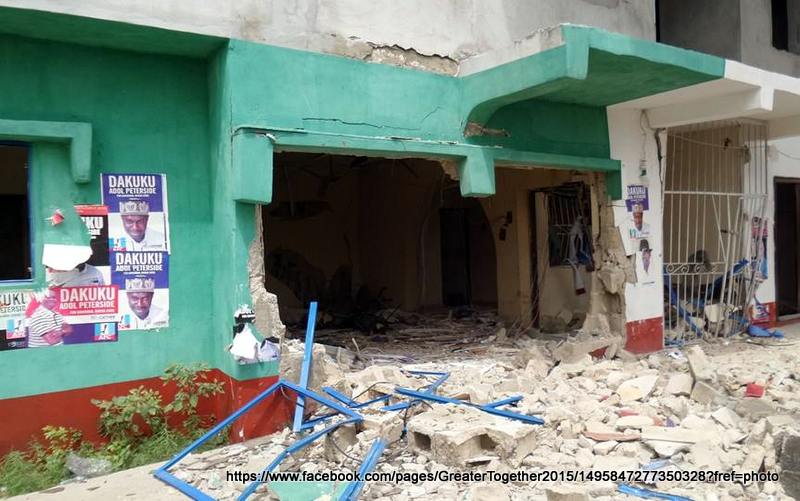 Another APC secretariat bombed in Rivers, as PDP office is attacked in Zamfara

Another secretariat belonging to the All Progressives Party [APC] was on Friday bombed in Rivers just five days after the party’s office in Okrika Local Government Area of the state was attacked with dynamites.

The fresh bomb attack on the secretariat at Ngo community in Andoni Local Government Area of the state occurred at about 3 am. Friday, triggering explosion in the vicinity, sparking panic among residents and destroying the building.

The Punch newspaper quoted the Ward 1 Chairman of the APC in the area, Amos Gogo, as saying the attack on the secretariat in Andoni was similar to that of Sunday’s incident in Okrika.

“We are calling on the government to come to our aid as we are no longer safe in the community. Anything can happen in the night. The building was badly damaged,” Mr. Gogo reportedly said.

The report also quoted the police spokesperson in the state, Ahmad Mohammad, as confirming the incident, but saying details were sketchy.

News of the violence in Rivers came just as reports emerged that some unknown persons on Thursday set ablaze the campaign office of the Zamfara Central Senatorial candidate of PDP, Ibrahim Shehu.

Three persons were injured while three motorcycles were burnt in the incident, the News Agency of Nigeria report.

A PDP member, Muhammad Ibrahim, said some unidentified youths raided the office, beat up the security guards and set the place ablaze.

Mr. Ibrahim said that those injured were Muntari Damba, Sani Yanga, and Malam Aminu, adding that the attackers removed one motorcycle and burnt three others.

Confirming the incident, the Police Public Relations Officer, Lawal Abdullahi, a deputy superintendent of police, said the police on patrol of the area rushed to the scene and discovered that the thugs were returning from a rally before they attacked the office.

He, however, gave an assurance that the culprits would be arrested and prosecuted.

The two incidents happened despite the leadership of the political parties participating in the February election signing an undertaking to avoid actions that could promote violence before, during and after the polls.