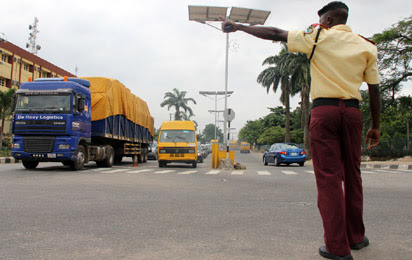 A Jimi Agbaje-led Peoples’ Democratic Party, PDP, in Lagos State would embark on mass retrenchment of civil servants in the state, the All Progressives Congress, APC, in the state has said.

In a statement issued in Lagos, Sunday, the APC said that a lot of civil servants in the state should “kiss their jobs goodbye” if the PDP takes over government in the February gubernatorial election.

But in a swift response to the claims, Mr. Agbaje, the PDP gubernatorial candidate, said that the APC’s “fears are illogical.”

“Just as the Fayose administration embarked on the mass sacking of over 800 members of the Peace Corps and other employees of the state, Agbaje would go after employees of all state parastatals,” Mr. Igbokwe said.

The APC said that a month after Mr. Fayose became governor of Ekiti State, he slashed the salaries of the state’s street sweepers from N10, 000 to N5, 000.

“At a time when the rate of unemployment in the country is high, workers on the payroll of the Lagos State Government cannot risk losing their means of livelihood by voting for a party that is on a revenge mission having been rejected by the people of Lagos in four different elections.”

The Lagos APC also urged the civil servants not to forget that while many states and the Federal Government had failed to pay the December salaries, the Lagos State Government paid early, and also added a 15 per cent salary bonus.

Responding to the claims, Felix Oboagwina, spokesperson for Mr. Agbaje’ campaign, said the APC was “turning logic on its head.”

“Lagos is a buoyant economy with a robust IGR. Instead of scrapping state-run agencies, the government of Mr. Jimi Agbaje will actually explore and exploit all avenues to create more jobs for the teeming masses of unemployed youths suffering under the APC government.”

Mr. Oboagwina said that the reality of fiscal wastage in Lagos was not state-run agencies, but drainpipes deliberately created into the system through political patronages to friends and acolytes of the powers that be.

“Actually, APC is accusing people of what it is guilty of,” Mr. Oboagwina said.

“Lagos State Government under APC and its antecedents have been guilty of stifling private initiative that could create avenues for employment, with the government’s negative and unfriendly attitude to entrepreneurship, double taxation, demolition of houses and shops, demolition and handing over of traditional markets to cutthroat developers, and the like.

“Today, Lagos is low on the international business-friendly index for world cities, thanks to APC.

“Every state owes itself a duty to block drainpipes. And Ekiti has done what the Governor feels is best for his state at this moment. But it is not a model we shall likely apply in Lagos.”