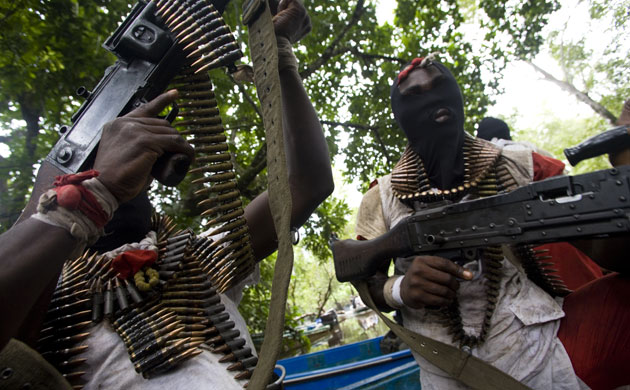 The Movement for the Emancipation of the Niger Delta, MEND, has denied links with the All Progressives Congress, APC.

In a statement Wednesday, MEND’s spokesperson, Jomo Gbomo, reacted angrily to a statement by the Peoples Democratic Party, PDP, questioning the group’s tie with the APC.

The group said it has never been approached by APC for anything, and described the PDP’s query as “callous and irresponsible,” saying it further confirmed that President Goodluck Jonathan and the ruling party are inept.

“MEND strongly denies any links with the All Progressive Congress and has never been approached for anything, at any point in time, by the party, as pettily alleged by Olisa Metuh,” Mr. Gbomo stated.

“The Movement for the Emancipation of the Niger Delta stands strongly by our endorsement and full support of General Muhammadu Buhari as the man to lead the country out of its present calamitous state in the hands of Goodluck Jonathan.”

The group also attacked the Ijaw Youth Council, IYC, for describing its members as “ghosts” and drew the attention of the IYC spokesperson, Eric Omare, to an earlier statement he issued lauding MEND for declaring a ceasefire.

While branding IYC as a tribal assembly of political praise singers, it noted that the decision of the militant group to support Mr. Buhari has shocked the Ijaw youth body.

MEND, therefore, asked the IYC spokesperson to explain if he was referring to “ghosts” in a statement he published six months ago in major news media lauding MEND for observing a ceasefire.

“The Movement for the Emancipation of the Niger Delta once more, urges Nigerians to ignore the empty threats of this so-called “ex-agitators” and the Ijaw Youth Council.

“Their reckless utterances only ridicule and confirm the colossal failure of the Amnesty Programme,” the militant group said.

MEND also urged the IYC to show Nigerians what President Jonathan has done for the Niger Delta people apart from paying monthly stipends to ex-militants of Ijaw extraction.

The militant group had on Tuesday thrown its weight behind the presidential candidate of the APC, Muhammadu Buhari, while also launching a scorching attack on President Jonathan.

In a three-page statement signed by its spokesperson, Jomo Gbomo, MEND said it endorsed and fully support Mr. Buhari, after careful consideration of the state of the nation.

The group said the decision to support the APC presidential candidate stems from the pathetic level the Jonathan administration has brought the country.

Reacting to the development, the PDP, through its National Publicity Secretary, Olisa Metuh, asked the APC to come out clean and explain to Nigerians, their connections with MEND.

In a statement on Wednesday, the PDP said while the onus lies on the APC to choose those to work with in their quest for power, “the explanation has become necessary following the unsavory public reactions and concerns trailing the statement by MEND backing their presidential candidate, Muhammadu Buhari.