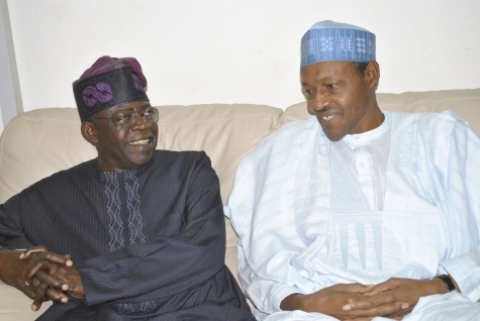 There’ll be change in Nigeria in 2015 — Buhari, Tinubu

The Presidential candidate of the All progressives Congress, APC, Muhammadu Buhari, has assured Nigerian youth that the country will witness the change they have clamoured for years.

He said 2014 was a challenging year for most of the citizens of Nigeria, recounting the killing or maiming of some Nigerians by “evil terrorists,” the missing 219 Chibok children and the occupation of towns and villages by the Boko Haram sect.

Mr. Buhari, a former head of state, said though these were enough for the youth to despair and wonder if the country cares about them and could protect them, they should be hopeful.

“2015 has arrived at a time of great discomfort; but the beauty of the New Year is that we can look forward with renewed hope and the knowledge that things can and will change,” he said.

“I have faith that 2015 is the year we shall begin to write a new story – a story of our youth creating jobs and expanding the frontiers of innovation and creativity everywhere from Mavin Records to the Co-Creation Hub; a story of genuine investment in our children and students be they in the University of Nigeria, Nsukka or in the Delta State University, Abraka; a country that finally makes a permanent shift from our debilitating dependence on the free-falling price of crude oil.

“I have unshakeable faith that 2015 will be the year of change.”

Mr. Buhari said he and the APC would achieve all of them.

“Yes, you are disappointed and you are angry, as you are entitled to, but you must never give in to the temptation to feel so weighed down by those who have failed you that you lose your hope and your energy and your passion to see change. You must never give up on Nigeria.

He said, “Another Nigeria is possible. A Nigeria where focused, visionary and competent governance vigorously tackles corruption, insecurity, poverty and promotes peace, progress and prosperity for all is attainable.

“After the current darkness, a glorious, new dawn for Nigeria is possible. But this needed change will not occur by chance. It can only be the result of deliberate and purposeful action on the part of our people to utilise democracy and popular power to achieve national liberation and transformation.”

Mr. Tinubu said it would be easy to give in to despair and despondency at the current state of Nigeria because the gap between the nation’s tremendous potentials and actual attainments was depressing and disheartening.

He argued that a country as endowed with human, material and natural resources as Nigeria should not have the level of poverty in which the vast majority of the our people live.

“The voodoo statistics of illusory growth and progress peddled by those currently in charge of Nigeria’s affairs do not reflect the dire material circumstances of millions of Nigerians,” he said.

The former governor said the ever widening inequality between the wealthy minority and the impoverished majority was fuelled largely by a scale of corruption and outright theft of public funds that had reached unprecedented heights in today’s Nigeria.

He said the traumatic experience of the over 200 Chibok girls who had remained in captivity for over six months showed that plaintive cries to an impotent government to ‘bring back our girls’ had become insufficient.

“Rather, we must utilise the power of our vote to ‘take back our country’ from the predators and scavengers in the corridors and bedrooms of power that currently hold her hostage. This calls for eternal vigilance to exercise our vote and protect out sacred mandate at the polls,” Mr. Tinubu said.

Also in a New Year message, the immediate past governor of Ekiti State, Kayode Fayemi, said the future prosperity of the country is tied to the change the people would make through the opportunity provided by the February 14 presidential election and other outlined elections in the year.

The former Ekiti State governor urged Nigerians to use their votes “as the only power they have to make the right change and bail themselves and the country out of the current inept PDP-led government which has proved to be helpless as the country continue to writhe in the pains of general insecurity, corruption, economic hardship and poor leadership.”