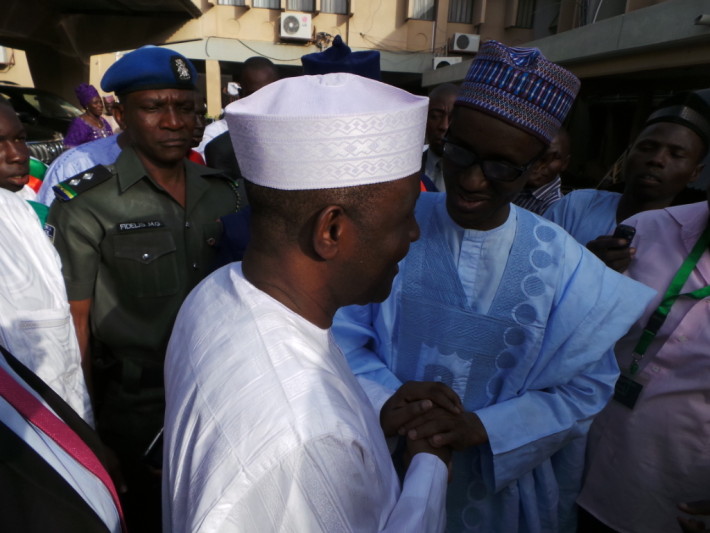 After weeks of bitter political wrangling, a former Chairman of the Economic and Financial Crimes Commission [EFCC], Nuhu Ribadu, and Governor Bala Ngilari of Adamawa State have buried their differences and agreed to work together in the interest of their troubled state.

Mr. Ngilari, who had also battled for the governorship ticket of the party, further pledged to ensure the success of Mr. Ribadu, the candidate of the ruling Peoples Democratic party [PDP] in the February 28 governorship election.

The governor made the pledge on Tuesday while receiving Mr. Ribadu, who led  a delegation of his campaign team to the Governor’s office in Yola, the state capital.

Mr. Ngilari and some high ranking members of the PDP in Adamawa state had refused to attend the state governorship primary election held in Abuja.

The National Working Committee [NWC] of the PDP had moved the election to Abuja after a committee it sent to Yola to conduct the primary election for state assembly election accused the governor of holding them hostage.

A former Political Adviser to President Jonathan, Ahmed Gulak, had earlier picked the ticket at the primary election held in Abuja

Mr. Ngilari on Tuesday confirmed he is the party’s candidate for the senatorial election.

“I will make sure all candidates of our party, including myself, win in the forthcoming election,” he said.

Mr. Ngilari also used the occasion to eulogise Mr. Ribadu for his steadfastness, patience and commitment to service.

He said Mr. Ribadu and himself had come a long way dating back to their working relationship at the Justice Chukwudife Oputa Panel which investigated allegations of human rights abuses by military regimes preceding the Olusegun Obasanjo administration.