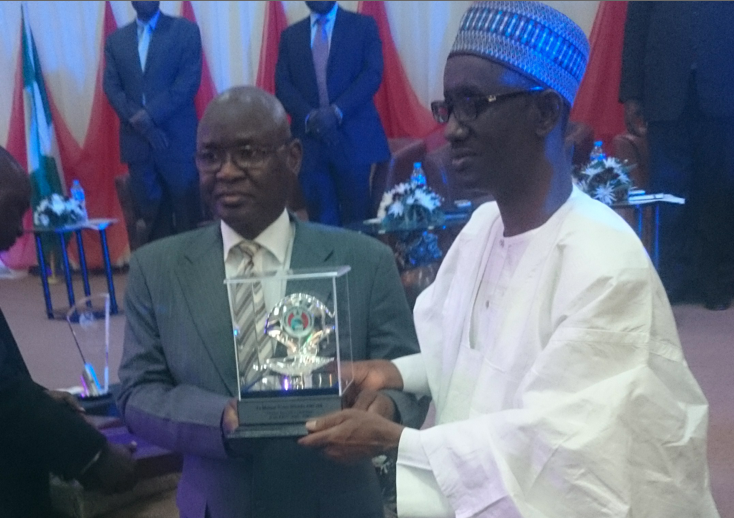 The Economic and Financial Crimes Commission [EFCC‎] has bestowed awards of excellence on its past and current staff who shaped the growth of the commission in the last decade since its formation.

Among those honoured at an elaborate ceremony held at the EFCC’s training academy were the pioneer chairman of the agency, Nuhu Ribadu and the publisher of this newspaper, Dapo Olorunyomi.

Mr. Olorunyomi, who served as Chief of Staff at the Commission was honoured alongside Asishana Okauru, who pioneered the nation’s Financial Intelligence Unit, for outstanding performance and exemplary dedication to the nation’s anti-corruption war while in the commission.

Mr. Okauru is now the director general of the Nigeria Governors’ Forum [NGF].

Kanu Agabi, a Senior Advocate of Nigeria, who was the Minister of Justice when the EFCC was created, was also recognised for smoothening the path that led to the birth of the commission.

Offem Uket and M.S. Abubakar were also recognised for their breakthroughs in prosecuting cases for the commission. Mr. Abubakar secured 10 convictions‎ for the Commission last year alone.

Also, a team of six investigators was recognised for “upholding the Commission’s core value of integrity” after reporting a bribe offer of N1.2 million while the team was investigating the Federal Medical Centre, Akure in Ondo State.

In their respective remarks, Mr. Ribadu and Mr. Agabi‎ commended the commission for finding a way to motivate its staff through recognition of their efforts.

The two also charged the staffers of the anti-graft body not to despair despite the hurdles associated with the fight against corruption.

They emphasised that Nigeria needs the sacrifice and work of the Commission and its agencies even though their labour may not bear immediate fruits.