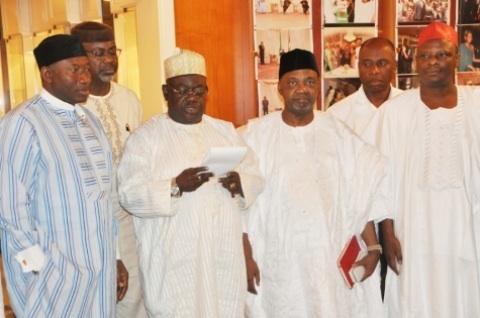 Despite being unable to pay civil servants in some of their states, the 21 governors of the Peoples Democratic Party, PDP, on Saturday night donated N1.05 billion to their party ahead of the 2015 elections.

The governor’s donation was part of the N21.2 billion raised by the party at its fund raising dinner held at the Presidential Villa, Abuja.

Punch Newspapers quotes Isa Yuguda, the Bauchi State governor, as saying each of the PDP governors donated N50 million to arrive at N1.05 billion. In several states, including PDP-controlled states like Benue and Akwa Ibom, thousands of civil servants have not been paid salaries; sometimes for up to four months. Mr. Yuguda did not comment on why the governors felt more obliged to donate funds to the party when workers were yet to be paid.

Apart from the governors, other major donors at the dinner include Tunde Ayeni, the chairman of Skye Bank, who PREMIUM TIMES had reported recently as leading a consortium to purchase the former national carrier, NITEL, and its mobile subsidiary, MTEL. Mr. Ayeni, who was chairman of the occasion, donated N2 billion. He announced that he was donating N1 billion on behalf of himself and his partner and another billion on behalf of his friends.

Also at the event, a former Information Minister, Jerry Gana, announced a donation of N5 billion on behalf of his friends and associates in the power sector.

However, the chief fund raiser, Aliko Dangote, did not make any donation as his representative at the event, Joseph Makoju, announced he had no mandate to make one. He said Mr. Dangote would contact the PDP leadership about his donation once he arrives in the country.

At the event, the PDP National Chairman, Adamu Mu’azu, announced that the money would be used to complete the party’s headquarters in Abuja and also run its affairs.

Mr. Mu’azu and President Goodluck Jonathan appealed to members who lost various primaries not to leave the PDP but work with the winners for the 2015 elections.

“If out of anger or frustration, you leave the party because you didn’t get what you wanted, then you are not contributing to the growth of democracy,” Mr. Jonathan said.