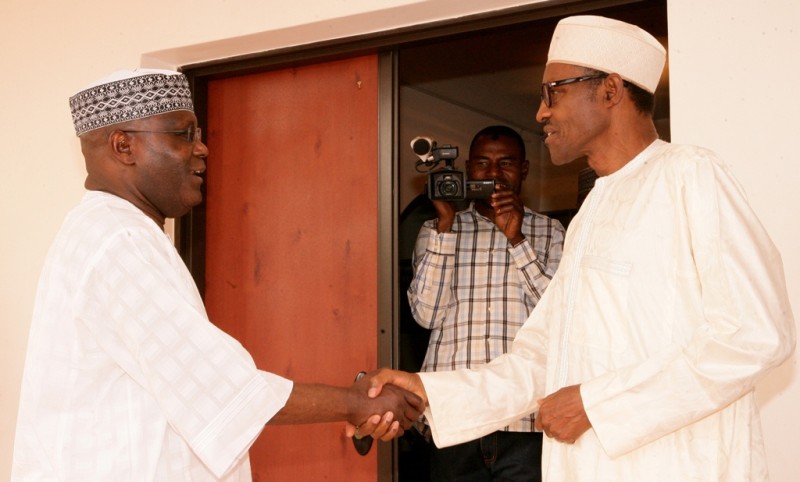 The presidential candidate of the All Progressives Congress [APC] on Sunday visited ex-Vice-President Atiku Abubakar, days after defeating the later and three others to clinch the presidential ticket of the party.

It is not clear what both politicians discussed at the closed-door meeting held at  Atiku’s  Abuja residence.

Mr. Buhari visited alone with just his orderly and driver while all Atiku’s aides were asked to stay away as the two leaders conversed behind closed-doors.

A source in the former vice-president’s camp however said “the APC presidential candidate came to seek the support and collaboration of Atiku in line with the former VP’s pledge to work for the success of the APC in the general elections”.

“It is also possible that they may have discussed the choice of Buhari’s VP consideration ahead of the meeting by the party tomorrow on the subject in Abuja,” the source said.

Their mission to the former vice-president’s residence is also unclear. But the Atiku Campaign Organisation had before the APC presidential primary proposed Mr. Onu to head the party’s Negotiation Committee, which was expected to work towards ensuring that the party went into the 2015 election after its primaries with a united front.

“I cannot confirm if that proposal was accepted by the party and if indeed Onu came visiting in that capacity to discuss the affairs of the party post-primaries and to chart a way forward,” our source in the Atiku camp said.

Atiku had in his concession speech, after losing the primary,  pledged to hand over his policy document to Mr. Buhari for possible review and implementation.

Atiku lost the party’s primaries to Mr. Buhari but congratulated him minutes after the results were announced and since pledged his support.