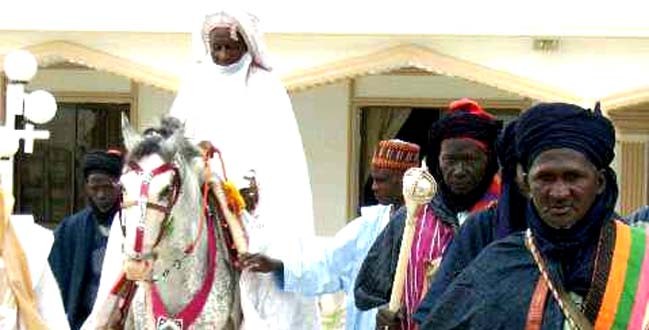 Emir of Mubi returns to palace as soldiers restore order

The paramount ruler of Mubi, Adamawa state, Abubakar Ahmadu, on Friday returned to his domain amidst tight security.

The palace was captured by Boko Haram in October and the terrorists’ flag hoisted to show their control of the area.

The monarch was received by palace officials and other subjects that were either trapped in the town or had earlier returned to it.

Mr. Ahmadu commended the Nigerian troops for liberating the towns and hoped that other towns under his domain, including Michika and Madagali local government areas, would soon be recaptured.

“We appreciate the gallant efforts of the Nigerian Military, the hunters and the vigilante that saw the liberation of our towns,” said the monarch while observing the Friday prayer with his subjects. “We are optimistic that the remaining towns will soon be liberated.”

The residents of the recaptured towns also expressed their gratitude and commended the soldiers for their brave efforts.

With normalcy restored some residents were seen going about their businesses.

A businessman based at the Mubi central market, Garba Musa, thanked the authorities for restoring order to the town.

“As you can see, we have started opening our shops in a peaceful atmosphere without the fear of being molested,” he said. “This is a welcome development because when the Boko Haram guys were having a field day, they could pounce on you callously but with the coming of the military, the situation has changed for good.”

However, all commercial banks in the town vandalized and looted by the insurgents are yet to resume operations.

The military have already continued with their mop-up operation, in preparation for the return of displaced residents, with every inch of the town combed by soldiers. The police and all paramilitary agencies have also returned to their bases. Stop and search operations are also being carried out fish out any lingering of the defeated insurgents.

The residents called on authorities to quickly remove the corpses littering the town as they constituted a health hazard. They appealed to the mobile network providers to restore their services to the towns, to facilitate communication.