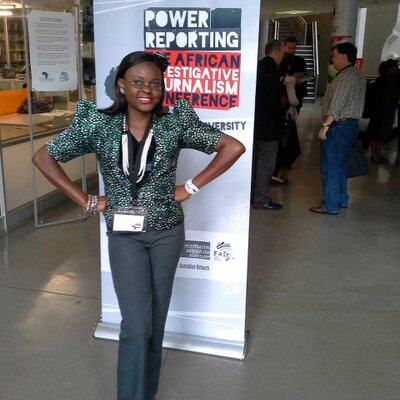 She won for her undercover expose on the human trafficking cartel in Nigeria.

Ms. Ovuorie received accolades for going undercover for several months to expose the deadly dealing of the human trafficking cartel in Nigeria.

PREMIUM TIMES’ Contributing Editor, Ibanga Isine, emerged runner up in the Onl‎ine Category for his reportage on the killings by soldiers at Dangote cement factory in Benue state.

New Telegraph’s Juliana Francis, emerged ‎the Investigative Journalist of the year for her narrative report on the extra judicial killings of suspects by the Special Anti-Robbery Squad, SARS, across Nigeria.

Ms. Francis who started her journalism career with The Sun newspaper before moving to Compass newspaper then Daily Newswatch also won the Investigative Journalist of the year at the print category for the same story.

Television Continental, TVCs ‎Kelechi Eziwanne emerged winner of the broadcast category thus, winning a grant provided by the family of  VinMatin Obiora Ilo of Africa Independent Television, AIT, to do an investigative report.

In a short speech, the chairman of the Wole Soyinka Centre for Investigative Journalism, Ropo Sekoni thanked the guest who attended and the Kingdom of Netherlands commission in Nigeria and the British Embassy for supporting the awards.

He took a swipe at the presidency for asking Nigerians to congratulate President Goodluck Jonathan for his anti-corruption war in 2013 following the country’s position on the corruption index.‎

He appreciated the efforts of the judges who selected the nominees and winners from a thousand of entries.

The event which was hosted by Deji Haastrup, General Manager, Policy, Government and Public Affairs, Chevron, began with a drama presentation of excerpts of Wole Soyinka’s ‘The Beatification of Area Boy’.

The ‎organisers tasked broadcast journalists to produce more investigative stories as it was the first time the broadcast category would have a winner in four years.