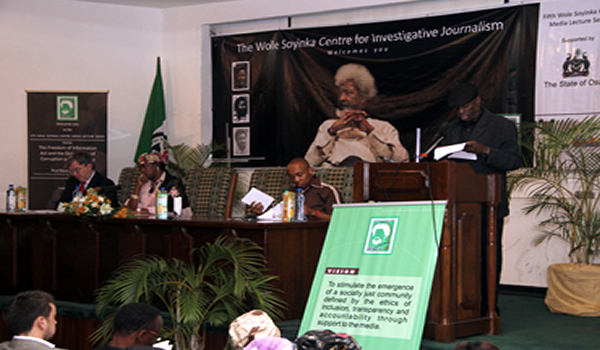 A statement by WSCIJ Coordinator, Motunrayo Alaka, said these as well as merit awards will be presented at the award ceremony.

The event will commence at 5p.m. prompt with a drama presentation of excerpts of Wole Soyinka’s ‘The Beatification of Area Boy’, on Tuesday 9 December – the international day for anti-corruption and the eve of the world human rights day, at the NECA main hall, adjacent Afrika shrine, Agidingbi, Ikeja Lagos.

Apart from the regular award categories, this year will see the WSCIJ in partnership with the Netherlands Embassy give an award to the best work highlighting the plight of girls and women in the report women category as well as present the VinMartin Ilo grant for the best work in the broadcast category.

Deji Haastrup, the General Manager, Policy, Government and Public Affairs, Chevron, will be the Compere at the ceremony which will see winners, runners up and commended works unveiled for the 2014 edition of the award programme.

Attendance to the award presentation ceremony is open to members of the public.