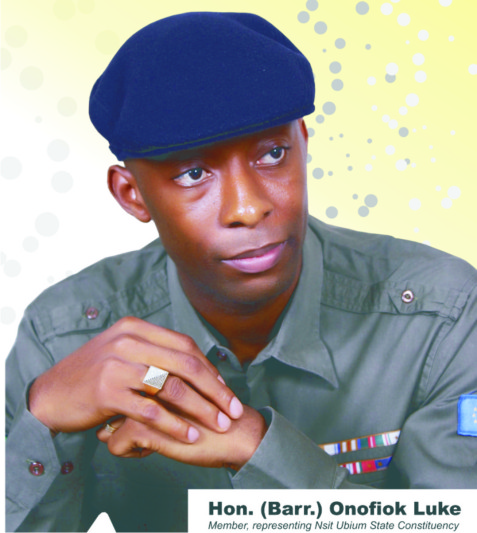 An estranged political godson to Governor Godswill Akpabio of Akwa Ibom State, Onofiok Luke, has begged the governor for forgiveness.

Mr. Luke, a serving member of the Akwa Ibom State House of Assembly representing Nsit Ubium state constituency, had in the past attacked Mr. Akpabio for allegedly maligning Ibibio people in the state.

In an open letter titled, “At a Time like This,” the lawmaker had lambasted the governor over some of his (Mr. Akpabio) policies he said were detrimental to Ibibios, the majority ethnic group in the state.

Ostensibly embarrassed by the lawmaker’s audacity to challenge him, Mr. Akpabio and his wife, Unoma, those familiar with the matter said, vowed never to allow Mr. Luke get a second term.

Associates of Governor Akpabio told PREMIUM TIMES that in the bid to block him from securing a second term ticket, the Akpabios allegedly sponsored another aspirant, Solomon Ekokoi, to challenge Mr. Luke at the PDP primary.

However, in a rare stroke of luck, Mr. Luke, who is a former President of the National Association of Nigerian Students, NANS, defeated the first family’s anointed candidate and clinched a ticket to return to the House.

Mr. Luke’s success at the primary, our sources said, dealt a devastating blow on Mr. Akpabio and his wife, who immediately launched a fresh plot to retrieve the ticket from the “stubborn lawmaker”.

The Akpabios, we learnt, subsequently insisted on having Mr. Luke tender an unreserved apology to them while also recanting some of the accusations he levelled against them in the past.

Unwilling to forfeit the ticket, Mr. Luke, on Thursday, published an apology in one of the local tabloids in the state, begging the governor to forgive his many transgressions.

“It is common knowledge that since 2002 I have enjoyed a very deep and beneficial father-son relationship with Your Excellency.,” Mr. Luke said in his apology letter.

“However, in the last one year, that relationship of 12 years has suffered seriously due to actions and inactions attributed to me.”

“As a political son, I hereby take responsibility for the comments, unfavourable words, positions, ideas and ideology espoused by me which may have contradicted Your Excellency’s disposition.”

Mr. Luke continued, “I apologise for the harmful toll which these may have caused Your Excellency. Specifically, I apologise for the use of the phrase, ‘admonish the Governor’, in my open letter to Akwa Ibom people, entitled, ‘At a time like This’. As a younger person, I can’t admonish an elder in our culture. All these are sincerely regretted.”

PREMIUM TIMES however learnt that even after apologising, the Akpabios are reluctant to forgive the Nsit Ubium lawmaker, a development that has prompted prominent politicians in the state to intervene.

It took the intervention of party elders and stalwarts from the area to halt the planned cancellation and subsequent re-run of the House of Assembly primary in Nsit Ubium state constituency of the state.

Mr. Luke could not be reached to comment for this story. Calls to his known mobile telephone line failed to connect. So also is the governor’s spokesperson, Aniekan Umanah, who also is the state commissioner for information.