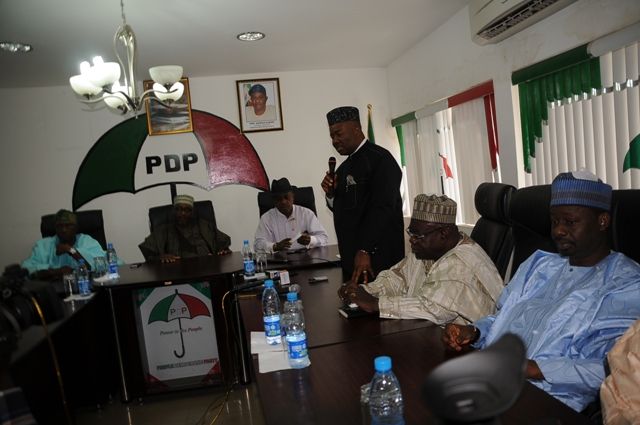 The offer means the governors will have to refuse to run before other candidates are considered.

The only the PDP governor seeking a second term is Ibrahim Dakwambo of Gombe State.

While the governors of Kaduna, Taraba and Adamawa States may be seeking re-election, they will be starting their first term as they merely completed the terms of their former governors.

It also emerged Tuesday that President Goodluck Jonathan was only publicly endorsed as the sole candidate of the party after he had been given the right of first refusal.

Adamu Mu’azu, the PDP National Chairman said Thursday that the party leadership had decided to give automatic tickets to state governors running for second term, who had performed creditably well, to re-contest their position in 2015.

According to him, the governors will be given the right of first refusal.

Mr. Muazu spoke when the president obtained his nomination forms at the party office in Aubja on Thursday.
Mr. Jonathan assured Nigerians that he would continue to work with them to move the country forward.

The president said that no matter how strong a president was across the world, he was only an individual that on his own, could do nothing.

“You alone cannot change the society. For you to succeed, you work with people; so if you are succeeding that means we have a team that is working to transform this country.

“So I will work with all Nigerians to make sure that we move our country to the next level,” the president said.
He said the days of saying that Nigeria was a potential great country was over, adding that, “Nigeria is a great country”.

This, he said, was demonstrated in the way the country collectively handled the Ebola case with the whole world being happy with Nigeria.

President Jonathan, however, added that it was time for all hands to be on deck to move the country to the desired level in the years to come.

He thanked Nigerians generally and reassured that his administration would not let the people down.

The president also expressed gratitude to the PDP leadership for giving him the right of first refusal.

“First let me thank God for today and Nigerians that are here today for this brief ceremony.

“Let me thank the leadership and all members of our party for believing in me and for giving me the right of first refusal.

“I could have still picked the forms if they did not give me, but giving me the right of first refusal has attracted more people that ordinarily it would have had,” the president said.

He specifically thanked the PDP national chairman and members of the party`s National Executive Committee, NEC, for unanimously endorsing the decision of its other organs that adopted him as the party’s sole candidate for the 2015 presidential election.

The president also thanked the PDP Governors’ Forum for providing the N22 million for purchasing the nomination and expression of interest forms for the election.

He thanked members of the Transformation Ambassadors of Nigeria, TAN, and other Nigerians for their contributions towards the purchase of the forms.

Shema is afraid of me –Tsauri