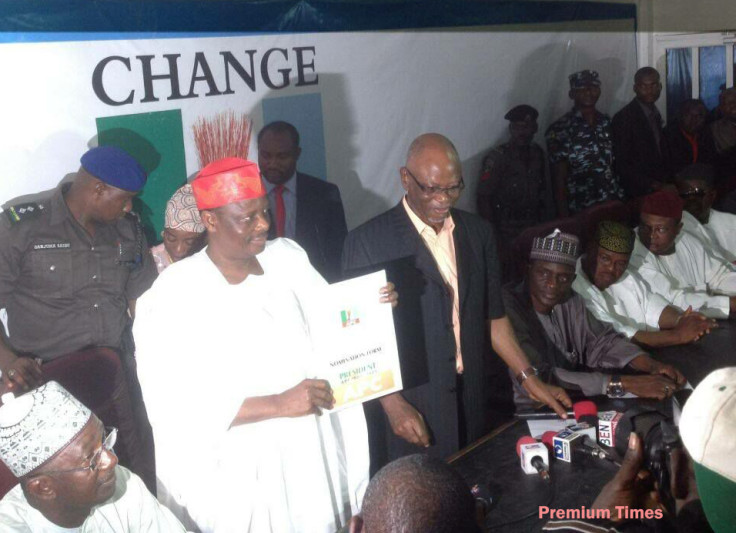 ‎Governor Rabiu Kwankwaso of Kano State on Thursday in Abuja picked the N27.5 million nomination and expression of interest forms of the All Progressives Congress, APC, to contest for the presidency in 2015 general elections.

He promised to regard his co-aspirants as a family and strive to play by the rules, to ensure a rancour-free primary.

”It is not a do-or-die affair. I assure you we will play the game according to the rules. Our participation is to add value to the party,” he told the party’s chairman, John Odigie-Oyegun.

The governor said many of his friends were still willing to defect to the APC.

”I assure you sir, that many more decampees are on the way after Tambuwal because they desire change and this party has all it takes to give Nigerians desired change,” Mr. Kwankwaso said.

He commended the National Working Committee of the APC for ”its determination to bring change and forming a formidable group for the success of the party”.

”I also want to thank those who contributed to ‎purchase these forms. I have the capacity to buy the forms but they secretly paid and assured me there is enough money for the campaigns.”

”Part of the amendment to our electoral constitution makes it possible for any eligible son to join the party today and contest tomorrow; so tell them they’re welcome, we have more forms for them.

”I am also glad to hear you’re ready to play politics without rancour; your words show your love for the country and personal commitment,” Mr. Odigie-Oyegun said.

The chairman further expressed delight that APC ”is the number one newsmaker today”, adding that the party was popular both locally and internationally.

He prayed to God to give Nigeria a man ”that will give us tangible change we can see or touch”.
Mr. Kwankwaso had, on Tuesday at a rally in Abuja, declared his intention to contest the presidential election. (NAN)
​