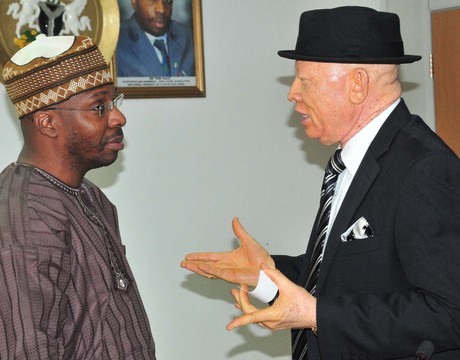 The Albino foundation will collaborate with NBS to find out the number of persons living with albinism in the country.

The Albino Foundation will collaborate with the National Bureau of Statistics, NBS, to conduct a national survey to the determine the number of persons with albinism in the country.

The Chief Executive Officer of the foundation, Jake Epelle, dropped the hint on Monday when he led a delegation on a courtesy visit to the Statistician-General of the Federation, Yemi Kale, in Abuja.

Mr. Epelle said that the visit was to collaborate with NBS to generate a comprehensive data on the size and characteristics of persons with albinism in Nigeria.

He said the foundation was budgeting N194 million for the conduct of the survey in order to achieve its objectives.

Mr. Epelle, who is also the founder of the foundation, said the survey’s findings would go a long way in guiding governments at all levels to know the challenges facing people with albinism and proffer solutions.

Responding, Mr. Kale expressed the NBS’s readiness to collaborate with the foundation to ensure that it achieved its target.

He said that NBS would constitute a technical committee to present expert report to stakeholders on the need to sponsor the survey.

The statistician-general urged the foundation to present and base its report on the aims and objectives of the survey.

The Director, Real Sector and Household Statistics in the NBS, George Oparaku, stressed the need to increase the sample of households in order to capture the survey.

Mr. Oparaku said that if the number of households was limited, it would be difficult to capture albinos in small households.

The Director, Demographic and Social Statistics, Louis Gambo, said the bureau had structures, statisticians and data collectors, who would do the jobs across the country.

Mr. Gambo said that NBS would carry out the survey in the selected houses, schools and other institutions in order to meet the foundation’s target.