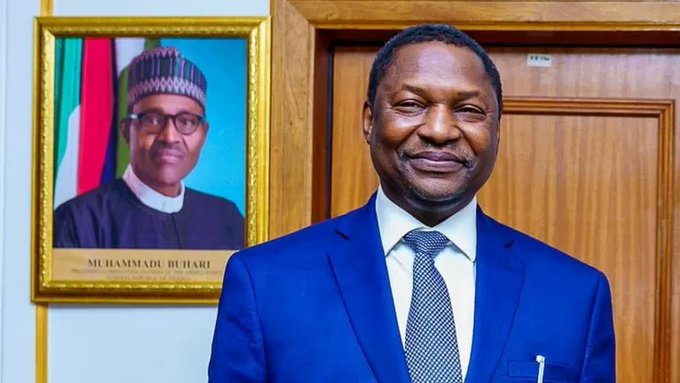 The Attorney-General of the Federation, Abubakar Malami [PHOTO CREDIT: @Laurestar]

The trial is set to continue Wednesday

A lawyer representing a British Virgin Islands-registered company, Process and Industrial Development (P&ID), on Tuesday, rejected Nigeria’s allegations that the country was a victim of bribery and deception in the controversial (P&ID) gas deal.

The lawyer, David Wolfson, argued against Nigeria’s position before a London court as Africa’s largest economy seeks to overturn an $11 billion debt judgement awarded in favour of the company.

Mr Wolfson argued that “none of Nigeria’s allegations affords any justifiable ground for setting aside the award” because “there was no bribery, no perjury and no corruption,” Reuters reported.

In court documents, Mr Wolfson said the challenge to the arbitration award was “just one part of (Nigeria’s) relentless, politically-motivated campaign to destroy P&ID and anyone and anything associated with it.”

The P&ID controversy dates back to January 2010 when the company signed a gas supply and processing agreement with the Ministry of Petroleum Resources on behalf of the Nigerian government.

P&ID alleged that after signing the agreement, the Nigerian government reneged on its obligation.

It added that attempts to settle out-of-court with the Nigerian government failed.

Earlier on Monday, at the start of an eight-week trial in London’s high court, Mark Howard, a lawyer representing Nigeria, told the court that P&ID obtained its contract “by telling repeated lies and paying bribes to officials.”

As a result, the lawyer claimed that P&ID “corrupted” Nigeria’s lawyers to obtain confidential documents during the arbitration,”.

P&ID on Tuesday, however, denied paying any bribes.

The company’s lawyer, Mr Wilson, noted that the contract struck between P&ID and the Nigerian government officials and the later arbitration is “not a story of fraud.” Rather, he said, it was a “sadly familiar Nigerian phenomenon of institutional incompetence.”

Failure by the west African country to properly support the project and subsequent unwillingness to release the money to defend arbitration proceedings is “not something that can be laid at our door, and is not something that the Arbitration Act can provide a remedy for,” Mr Wolfson said.

He added that Nigeria’s lawyers had done the best they could while operating in a “Kafkaesque” system of ministerial buck-passing within the country’s government, which had no interest in doing anything to help win the case.

President Muhammadu Buhari and the nation’s Attorney General, Abubakar Malami, have been left “personally exposed” by the arbitration loss, he said.

“Both had been told they needed to release funds to pay for experts if they had any chance of avoiding a catastrophic defeat, and ignored the warnings,” Mr Wolfson told the court.

He added that both men had political and personal motivations to do whatever they could to prevent the awards from being enforced, and they “lashed out” and found someone else to blame.

The only way for the awards to be challenged was that there had to be some kind of fraud. Mr Wolfson said it was decided at the “highest political level” to do whatever could be done to generate the material to support that case.

He said the government was told to instruct a leading, internationally recognized firm of experts to argue on their behalf but that Nigeria “would not write a check”.

“This is not a failure by lawyers on the ground,” Mr Wolfson told the court, claiming that it was “institutional paralysis all the way to the top”.

He said Nigeria’s lead advocate, Olasupo Shasore, and other members of his legal team have become “collateral damage” as the country desperately attempts to avoid paying P&ID for failing to keep up its end of the contract.

Mr Wolfson told the court that the company did all it could to keep the project alive in the hope it could be saved, but the Nigerian government failed to take any meaningful steps to deliver a supply of gas.

The 2010 gas supply and processing agreement was a genuine contract that P&ID “honestly intended to perform,” he said.

The trial is set to continue Wednesday.

A peep at some reading old men, By Udeme Nana

US imposes visa ban on Nigerians who disrupted elections