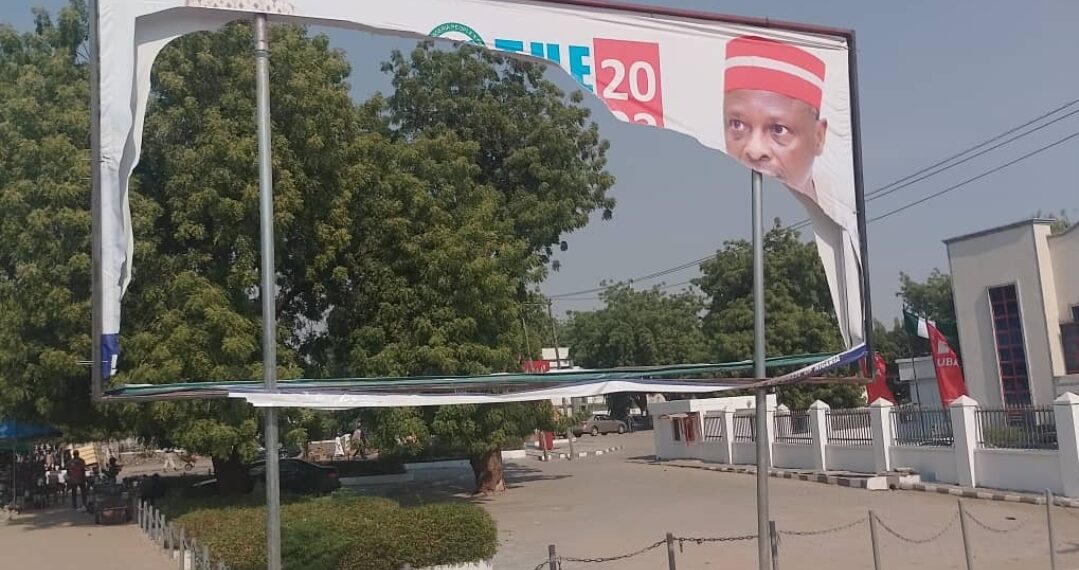 The Chairman of the APC, Ali Bukar Dalori, denied the allegations saying that “the NNPP is concocting lies" against the ruling party.

The opposition New Nigeria Peoples Party (NNPP) in Borno State has called on the Governor of the state, Babagana Zulum, to order the supporters of his party, the All Progressives Congress (APC), to stop destroying opposition campaign billboards.

During the weekend, the NNPP alleged that 16 of its billboards were destroyed by agents of the ruling party.

This allegation was contained in a statement released by the party.

The Chairman of NNPP in the state, Mohammed Mustapha, who signed the statement, claimed his party has had the cause to replace several billboards that were destroyed by the supporters of the ruling party in the last two weeks.

The chairman said the latest of the attacks on their campaign structures was carried out on Friday after the party had “spent so much resources to replace the 16 billboards that were earlier destroyed.”

“It is alarming to note that no other group is leading this mundane and archaic politics of bitterness other than the ruling All Progressives Congress (APC) and its government under Professor Babagana Umara Zulum, a man who has been promoted as the people’s governor,” the statement said.

“On Friday, January 20, 2023, the campaign billboards of our Presidential candidate, His Excellency Rabiu Musa Kwankwaso, and that of the Borno Central Senatorial candidate, His Excellency Attom Magira Tom, were violently attacked and destroyed in strategic locations across the Maiduguri Metropolis and other major communities within the constituency.

“This attack on our campaign structures was coming barely two weeks after similar destruction was carried out on the same number of billboards. As law-abiding members of a party whose principles have resonated with the electorates, we did not call for counter-violence. Instead, we urged our teaming supporters to remain calm and law-abiding while the leadership of NNPP reported the matter to concerned security agencies.

The NNPP state chairman said: “It is even more saddening to note that the APC and its thugs did not only destroy our billboards, but they also went ahead to replace the banners on them with those of some of their own APC candidates even though we have paid the Borno state government all the required fees for the advertisement permit.

“We want to kindly remind the general public that this attitude of violence by the APC and its government did not start today.

“All these unfortunate happenings are going on in our state at a time when the state is governed by a University Professor and member“of the National Institute, who is supposed to be an intellectual and above board.”

The chairman, who had also shared photographs of the destroyed campaign billboards, expressed “disappointment at the ruling party’s level of political intolerance so far demonstrated by the Governor and his ruling party.

PREMIUM TIMES reporter saw some of the destroyed billboards with NNPP inscriptions at some locations of Maiduguri, but could not verify who was responsible for the defacement.

While calling on the Independent National Electoral Commission (INEC) to deploy relevant sections of the Electoral Act to sanction those responsible for defacing the billboards, the party also ”call on the APC-led government under Professor Babagana Zulum to call his party members to order, as there is a limit to indiscretion.”

“We will continue to call our members to maintain orderliness, but will not tolerate further onslaught on our party campaign structures,” Mr Mohammed warned.

“We are also worried that most of the destruction perpetrated on our billboards by the APC was done at locations where the offices of the security agencies are located, and nothing was done to prevent its continuous recurrence.

Meanwhile, the Chairman of the APC, Ali Bukar Dalori, denied the allegations saying that “the NNPP is concocting lies” against the ruling party.

“The APC and its teaming supporters are peace-loving individuals who are poised to ensure Borno sustains its developmental strides under the good leadership qualities of Governor Zulum,” Mr Dalori said.