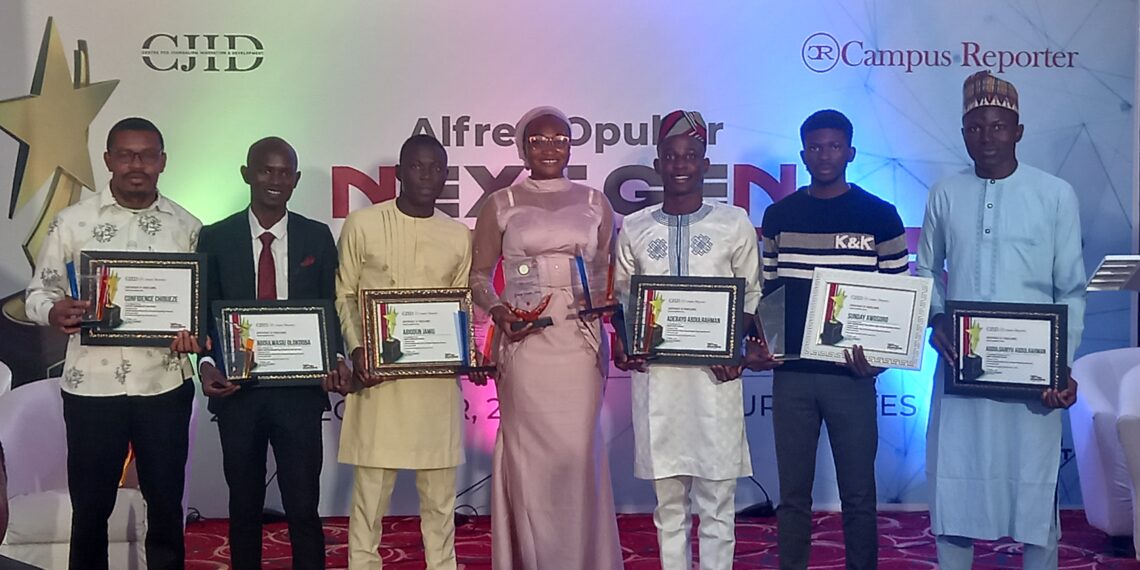 Some of the recipients of Alfred Opubor Next Gen Awards

Alongside the award plaques presented to the winners, CJID also announced a N100,000 cash prize for winners, N60,000 for first runners-up and N40,000 for second runners-up.

The Centre for Journalism Innovation and Development (CJID) has presented awards and cash prizes to outstanding student journalists in Nigerian tertiary institutions under its Campus Reporter Programme.

This is the second edition of the awards named after Alfred Opubor, Nigeria’s first Professor of Mass Communication.

The maiden edition of the awards was held in 2018 with seven categories.

CJID had earlier shortlisted three entries for each of the categories and unveiled the winners at the weekend in Abuja.

Speaking at the event, the Publisher of PREMIUM TIMES and Founder of CJID, Dapo Olorunyomi, said the Campus Reporter platform was initiated to train journalists and equip them with the skills to thrive in newsrooms.

Mr Olorunyomi, who described campus journalists as future media leaders, noted that the alumni and winners of the Campus Reporter awards have gone on to do great journalism and win several other awards in the mainstream media.

“Journalists on campus are unique newsroom leaders tomorrow,” he said.

He stated that the initiative has been expanded to other West African countries including Liberia and Ghana and that very soon, Sierra Leone would be added.

According to the organisers, the award generated 164 entries from 53 tertiary institutions in Nigeria.

Alongside the award plaques presented to the winners, CJID also announced a N100,000 cash prize for winners, N60,000 for first runners-up and N40,000 for second runners-up.

Zainab Adam, a recent graduate of Mass Communication from the University of Maiduguri, whose entry received the highest scores awarded by the judges, emerged as the Best Campus Investigative Reporter of the 2022 Alfred Opubor Next-Gen Awards.

Ms Adam, who emerged the winner of the Health Reporting category with her story: “Lack of Ambulance Emergency Services Hamper Universal Health Coverage in Rural Borno Communities,” was also the second runner-up in the Gender category.

Rabiu Musa, a 2021 graduate of Bayero University Kano (BUK) and Abdulwasiu Mujeeb Idowu, a 2021 law graduate of UDUS emerged as the first and second runners-up respectively.

Abdulrasheed Hammad, a 400-level Law student of UDUS and Mariam Hamzat, a 500-level student of Pure and Applied Biology at Ladoke Akintola University (LAUTECH) emerged as the first and second runners-up respectively.

Adebayo Abdulrahman, a 200-level student of Political Science from the University of Ibadan won the Best Fact-Check, with his entry: “No, Buhari Did Not Lift 10.5 Million Nigerians Out Of Poverty in Two Years.’

Muhammed Bello Buhari, a 400-level Law student of ABU and Muktar Balogun, a 400-level student of Mass Communication at FUOYE emerged as the first and second runners-up respectively.

Ms Hamzat from LAUTECH won the best Gender Story with her story on the hazards facing women in Garri producing communities in Oyo state.

Meanwhile, Ms Adam who emerged as the best Investigative Reporter, and Abdulganiyu Abdulrahman, a 300L student of Islamic Studies at UDUS emerged as the first and second runners-up respectively in this category.

Confidence Chibueze, a 100-level Communication Art student from the University of Uyo won the Sports Writer of the year category with his story on the decrepit nature of the Uyo Township Stadium.

A month after the report, Akwa Ibom State Government ordered workers to resume reconstruction work at the stadium and unveiled plans for the construction of an Olympic-sized swimming pool.

Mr Oluwaferanmi however won the best Election Observation Report with his story, “#EkitiDecides: Daniel in the Lion’s Den”.

Vindication Alawode, a student of Sociology at EKSU and Taiwo Fatola, a 300-level student of Medicine from Osun State University, emerged as the first and second runners-up respectively.