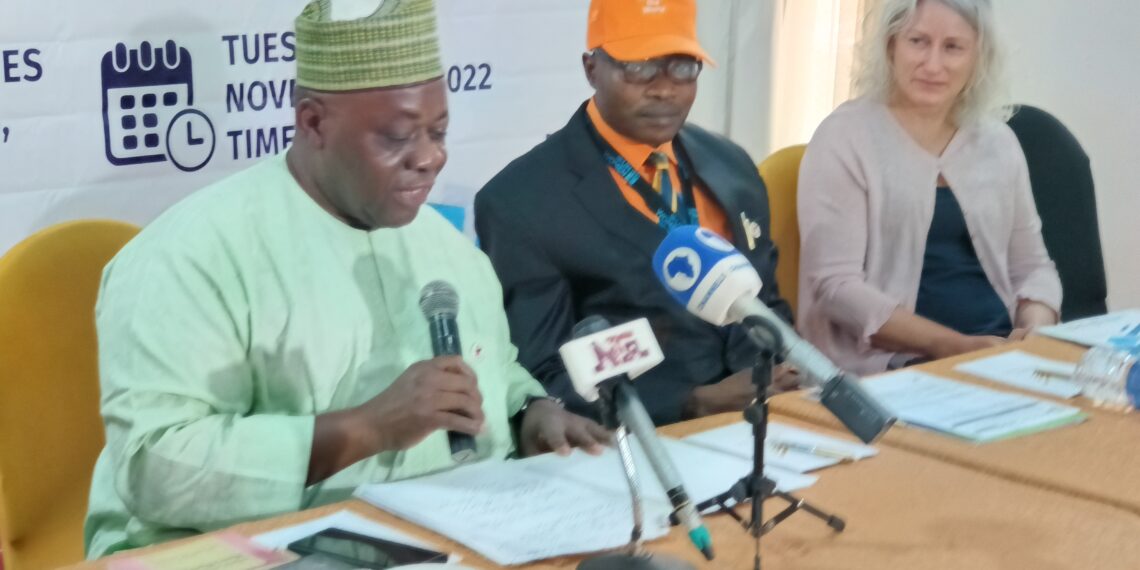 Panelists at the HeForShe event

The HeForShe campaign is a global movement that started in 2015 with the United Nations aiming to engage 1 billion men and boys on the topic of gender equality.

As campaigns gather momentum ahead of Nigeria’s 2023 elections, the UN Women has invited Nigerian men to promote women’s political participation and leadership in Africa’s largest democracy.

The UN Women Representative to Nigeria and ECOWAS, Beatrice Eyong, made the call on Tuesday in Abuja at a special convening tagged ‘HeForShe event; Promoting Women’s Political Participation in Nigeria.’

The programme was organised by the Centre for Democracy and Development (CDD), UN Women, and the Government of Canada.

The HeForShe campaign is a global movement that started in 2015 with the United Nations aiming to engage one billion men and boys on the topic of gender equality. In Nigeria, the campaign was launched in 2017 by then-acting President Yemi Osinbajo during which a call was made for men and boys across the country to champion the cause of gender equality and advance women’s rights in governance.

“HeForShe is a commitment to champion, to lead by example, to actively mobilise and to take action to expand the community of men and boys by working to advance gender equality and women’s participation,” Ms Eyong said.

“It is a call to a partnership with women to build a more just and equal world including in leadership and governance.”

She added that the solidarity movement is a critical part of efforts to promote gender equality and women’s political participation in line with the Sustainable Development Goals, which include a commitment to end discrimination and inequality in access to justice and participation in political and economic life on the basis of gender by 2030.

“The need for the global HeForShe campaign stems from a realisation that though there has been progress in some areas of our efforts to advance women’s rights, gender equality, and participation, the gaps remain unacceptably high,” Ms Eyong said.

Quoting data from the European Union Factsheet on 16 days of activism, Mr Ibrahim said a lot of the conditions of women in Nigeria today were the same as they were in 1982.

“The level of violation of the rights of women in Nigeria is extremely high,” he said.

What is disheartening about the situation is the level of impunity at which such deprivation and violence occurs, Mr Ibrahim said.

The EU report pointed out that only 0.9 per cent of offenders who violated the integrity of women and girls get to go to a court of law.

If the conditions of women are so poor in Nigeria, Mr Ibrahim submitted, “It’s because women are not on the table where decisions about their lives are made.”

He quoted the EU data saying since 1999: “only 20 per cent of women have been ministers and special advisers to presidents; the average number of women legislators is 7 per cent; only 3 per cent of local government chairs have been women and members of the state house of assembly respectively.”

This is totally unacceptable, Mr Ibrahim concluded, adding, “we must, as men, take pride that we are change agents in our society, and any society that promotes equality between its members is superior to the societies that do not.”

On his part, Kole Shettima, the country director of the MacArthur foundation, said the role of religious leaders in enabling the participation of women in politics is critical.

“Religion has majorly affected the participation of women in Nigerian politics. Many religious leaders have interpreted that women cannot be leaders and they cannot allow women to be leaders,” Mr Shettima said.

Interpretation of religious text is a critical part of the discourse, said Mr Shettima, calling for a broader engagement with religious bodies across the country.