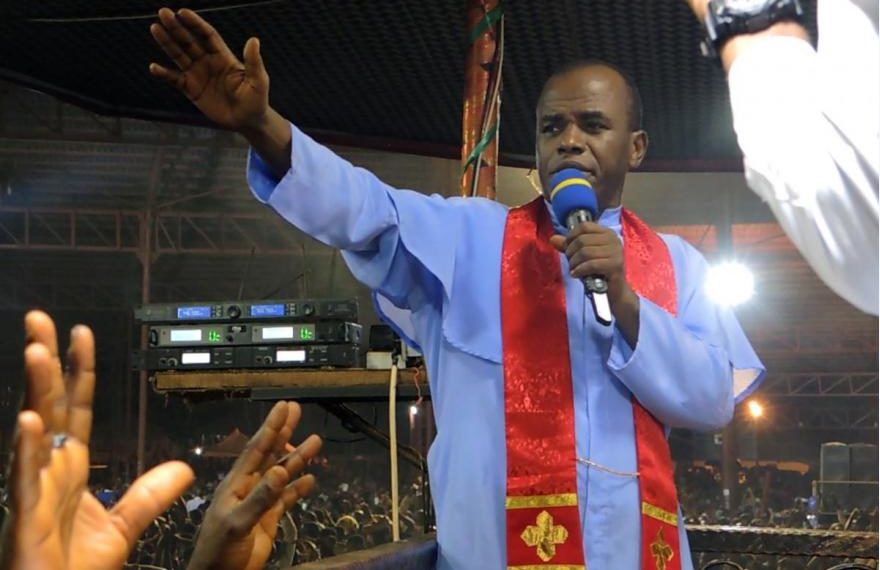 Mbaka spotted at US monastery

There were speculations that he visited the US monastery to attend a retreat.

Outspoken Catholic priest, Ejike Mbaka, has arrived at a monastery in Los Angeles, US, reportedly to attend a retreat.

This is coming about two months after he stepped down as the Spiritual Director of Adoration Ministry, Enugu, and proceeded to a monastery as part of the disciplinary measures against him by the leadership of Catholic Diocese of Enugu.

Mr Mbaka, had in June, prophesied that Mr Obi would not win the 2023 presidential election because he is a “stingy man”.

Many Nigerians, including the Catholic Diocese of Enugu, criticised him over “the prophetic declaration” on the LP candidate.

The cleric later apologised to the former governor and his supporters, saying his intent was not to malign him.

The Bishop of the diocese of Enugu, Callistus Onaga, later banned church members from attending services at the ministry, following the controversial prophecy.

The ban was lifted, three months after, before the cleric was asked to step down and embark on a “solitary journey” to the monastery.

Anthony Amadi, another Catholic priest, was appointed as the new spiritual director of the ministry.

The diocese, however, did not give details of the monastery where Mr Mbaka had been scheduled to go.

There were speculations that the cleric was posted to a monastery in Anambra, another state in the South-east.

But on Tuesday, a video clip which captured the cleric standing by the signpost of a monastery in the US surfaced on social media.

“Officially, I have entered into St. Andrew’s Abbey Monastery in Los Angeles, Valyermo,” Mr Mbaka said in the video clip while filming himself and beaming with smiles.

He did not state if he was posted to the monastery in continuation of his “period of solitude” as directed by the leadership of the church.

There were speculations that he visited the US monastery to attend a retreat.

PREMIUM TIMES, however, could not immediately verify the claim.

Mr Mbaka has been known for his end-of-the year cross over night programme where he makes prophetic declarations for the coming year.

In Enugu, where the Adoration Ministry is located, there are concerns among followers of the cleric that this year’s prophetic programme may not hold, given the ongoing “disciplinary measures” against the priest which could keep him outside the state until next year.

Many worshippers at the ministry said the cleric’s period of solitude was billed to last for three months, a claim the church leadership was yet to confirm.

Jonathan, Kukah, Amaechi, Yusuf Ali, others for unveiling of “The Letterman”