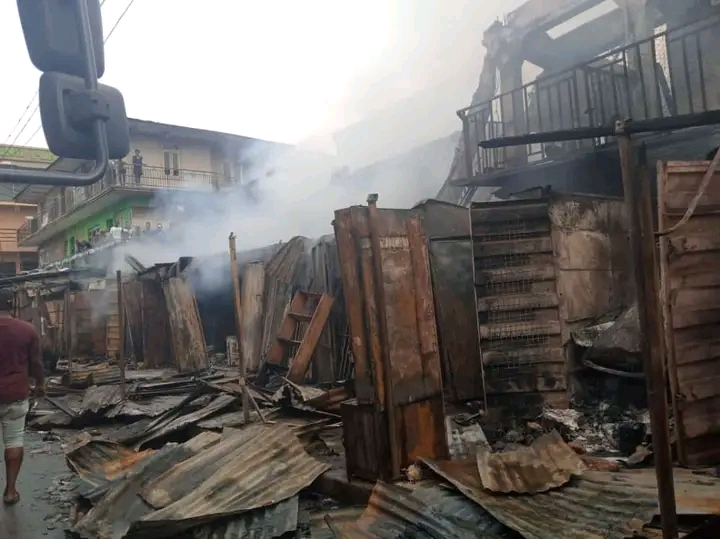 Some shops destroyed by the fire

The fire began at midnight, according to a shop owner.

Goods worth millions of naira were, on Monday, destroyed when fire razed a section of Onitsha Main Market, Anambra State, Nigeria’s South-east.

This is happening barely three weeks after fire razed Ọgbọ Ọgwụ Market in Onitsha which resulted in the death of many people.

The latest fire incident began at about 12 a.m. at Kano Street Section of the market, PREMIUM TIMES learnt.

A shop owner in the market, Chinedu Ukanu, told PREMIUM TIMES that the traders could not immediately reach the fire fighters for help when the fire began.

“You know, it started around midnight. So, we couldn’t reach fire service people on time until the day had almost broken,” he said.

“Several shops and goods were destroyed,” he added.

Mr Ukanu said the arrival of the fire fighters prevented the inferno from causing more damages.

A video clip posted on Facebook by a witness showed fire still burning in the section of the market.

The Chairman of Anambra State Fire Service, Martin Agbili, has confirmed the incident.

He said firefighters were deployed in the market in response to a distress call.

Mr Agbili said they suspected the cause of the fire to be a power surge in one of the cosmetics shops in the market.

“The highly combustible nature of the (cosmetics) materials and substances sold at that area, contributed to the high and quick spread of the fire,” he said.

The fire chief said no life was lost in the incident and that firefighters deployed in the area were able to put off the fire.

He was silent on the number of shops affected by the fire.

Mr Agbili said some firefighters from the Federal Fire Service as well as police operatives in the state put off the fire.

He advised traders in the market and other residents of the state to turn off their electrical and electronic appliances before leaving their houses and shops.

Meanwhile, Governor Charles Soludo of Anambra State has commiserated with victims and owners of the shops destroyed by the fire.

In a statement on Monday by his spokesperson, Christian Aburime, Mr Soludo expressed sadness over the incident.

“As a responsive government, we are already on top of the situation, investigating the remote and immediate causes of the fire, as well as the losses incurred with a view to averting a future recurrence of the disaster,” he said.

“I encourage those affected to remain strong and resolute in the face of extreme loss as we continue to work with relevant institutions to find lasting solutions to perennial fire incidents across the state,” Mr Soludo added.

The governor also urged residents of the state to adhere to fire safety measures especially during this dry season to avoid occurrence of fire incidents in the state.