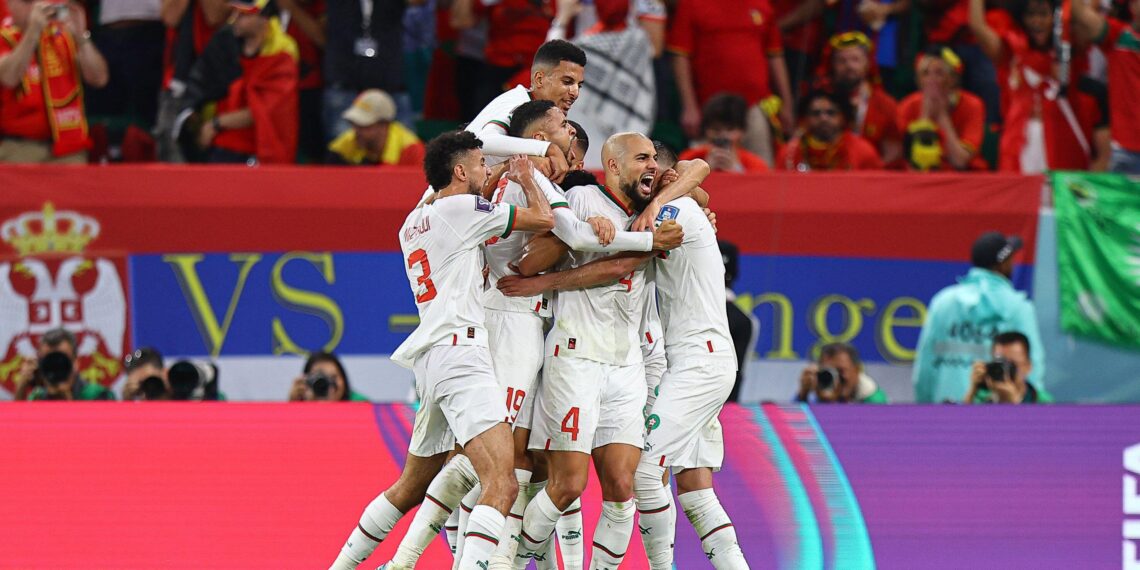 The Atlas Lions stunned Belgium with two second-half goals to pick their first victory and second clean sheet in the competition.

For the first time in 24 years, the Morocco national team were able to secure a victory in a World Cup match as they beat Belgium 2-0 on Sunday in their second group game at Qatar 2022.

The Atlas Lions, before Sunday, last tasted victory at the France 1998 World Cup when they trounced Scotland 3-0.

Morocco have won a World Cup game for just the third time in their history:

Coach Walid Regragui-led Moroccan side registered the second upset of the day after Costa Rica had also beaten Japan earlier.

Belgium were the overwhelming favourite for victory over Morocco based on their past records in World Cup group-stage matches.

However, that wasn’t the case in Sunday’s tie as the Red Devils were subdued by two second-half goals from substitute players, Abdelhamid Sabiri and Zakaria Abdoukhal.

Belgium started the better side with Michy Batshuayi having received a pass from Thorgan Hazzard. He latched the Red Devil’s first shot on target that was blocked by goalkeeper Muni in the fifth minute.

An exchange of the ball by Thorgan and De Bruyne from a freekick gave the Red Devils a corner kick in the 16th minute.

Belgium again failed to get the ball into the net after Amadou Onana’s header from a corner went slightly off target in the 17th minute.

However, Morocco and Chelsea forward Hakim Ziyech put up a long-distance shot that went off-target in the 21st minute.

Meunier’s through ball to Batshuayi was stopped by Munir in the 33rd minute. Two minutes later, Archaf Hakimi blasted wide what could have been a chance for the Atlas Lions to break the deadlock.

On the cusp of halftime, Hakim Ziyech’s direct freekick goal was chalked off by VAR after Romain Saiss’ was found in an offside position.

The first half then ended in a barren draw which also happened to be the 14th of 26 games played at the 2022 World Cup.

Both sides continued from where they stopped in the first half as Morocco got on Belgium as early as they could get. Five minutes into the second half, Ziyech’s freekick wasn’t a threat to Courtois who handled it with ease.

Meanwhile, Sofiane Boufal added to Morocco’s attempt with his shot that went slightly past the goalpost in the 57th minute.

Belgium then got their first shot on target in the second half after substitute, Mertens whizzed a close-range shot that was pulled out by Munir in the 65th minute.

The moment the Lions had been waiting for finally came after substitute Abdelhamid Sabiri broke the deadlock spinning a direct freekick past Courtois in the 73rd minute. Sabiri’s goal is Morocco’s first-ever World Cup goal from a freekick.

Meanwhile, the Lions kept Belgium at bay to defend the glorious goal they had as Coach Walid Regragui switched to a 5-3-2 formation.

But the Lions were more energetic than the Devils who they chased to hell with a stoppage-time second goal from another substitute, Aboukhal Zakaria, who pierced through Courtois from Ziyech’s cutback pass.

Morocco will face Canada in their final group game while Belgium have a date with Croatia.