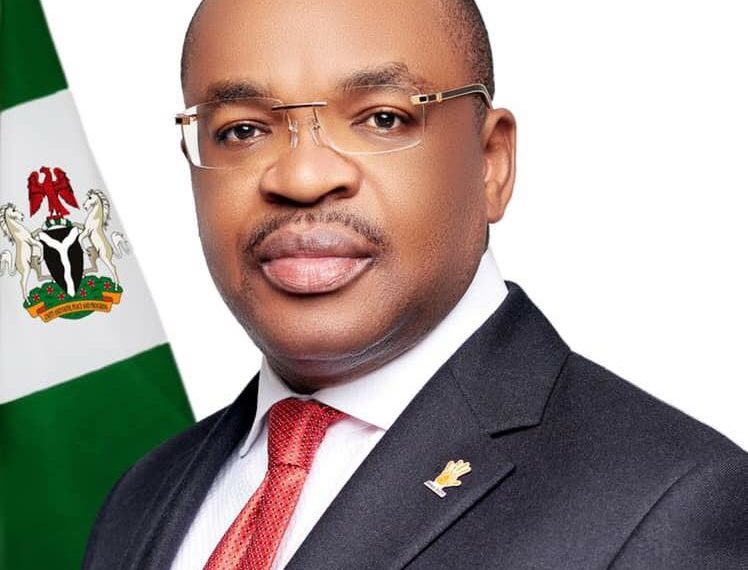 “We came here to govern, we have an account, we’re servants of God.”

Governor Udom Emmanuel of Akwa Ibom State on Tuesday refuted allegations linking him with the trial of a governorship candidate in the state by the Economic and Financial Crimes Commission (EFCC).

Bassey Albert, a senator and the Young Progressive Party (YPP) governorship candidate in Akwa Ibom State, is being prosecuted by the EFCC for allegedly receiving bribes of 12 cars worth N254 million.

Mr Albert is said to have received the money from an oil marketer, Olajidee Omokore, during his tenure (2010 – 2014) as commissioner for Finance in the state, this newspaper reported in 2019.

Mr Albert, a former member of the PDP, the ruling party in the state, had months ago defected to the YPP where he secured the party’s ticket for the 2023 governorship.

With his grassroots support and popularity, Mr Albert is seen as the main challenger to Mr Emmanuel’s preferred candidate, Umo Eno of the PDP.

There have been rumours in the state that Governor Emmanuel is trying to influence the EFCC prosecution of Senator Albert to create an advantage for the PDP governorship candidate, Mr Eno.

Mr Emmanuel said on Tuesday that the rumours were lies.

“Some candidates of some political parties are saying the governor wants to imprison them. It is total lies because I’m not that type of governor. I don’t even know the facts of the case they have with EFCC.

“These are cases that started before I became the governor. Let people stop blackmail and face their case. I entered Abuja, everybody was calling me saying ‘this candidate says you want to imprison him’

“Enough of that,” Mr Emmanuel said at the Victor Attah International Airport, while receiving two additional A320-200 Airbus aircraft on lease from a European company for Ibom Air.

“We came here to govern, we have an account, we’re servants of God,” he added.

Messrs Emmanuel and Albert were political allies, dating back to 2015 when the latter withdrew from the governorship race for the former.

Mr Albert, after withdrawing from the race was compensated with the senate ticket of Akwa Ibom North-East, where he is currently doing his second term.

He also supported Mr Emmanuel’s second term in 2019 after the former governor of the state, Godswill Akpabio defected from the PDP to the APC.

The two former allies fell out after Mr Albert declared interest to contest the governorship of the state in the 2023 elections.

Mr Emmanuel unveiled his preferred successor for the governorship of the state in January, hours after returning from Mr Albert’s thanksgiving service.

Mr Albert failed to get the court to nullify the results of the PDP primary. He then defected, with his supporters, to the YPP, where he is hoping to actualise his governorship ambition in next year’s election.