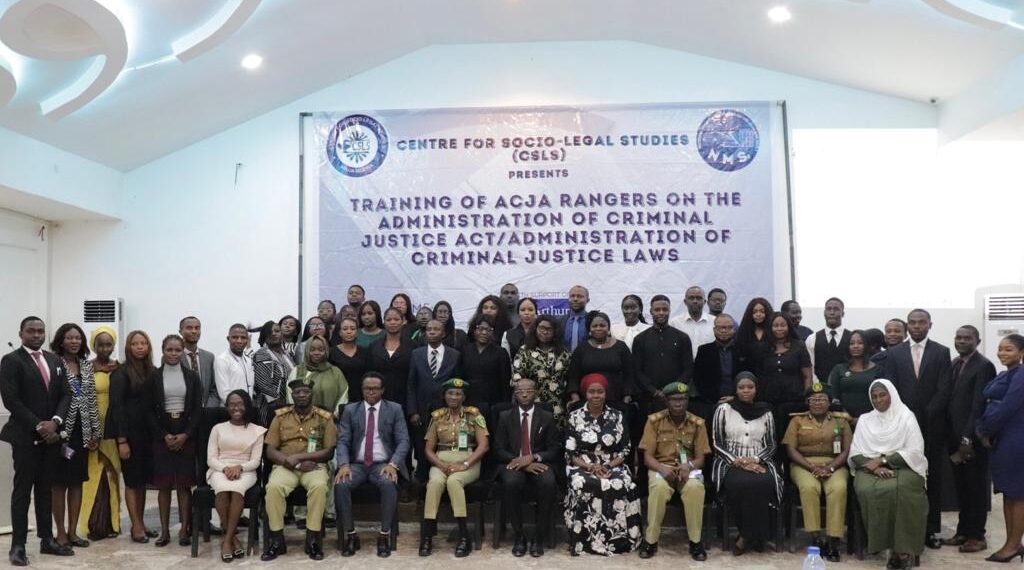 A group photograph of participants and resource persons at the training on criminal justice administration on Tuesday in Abuja.

CSLS says "the poor and non-politicians have a right to speedy access to justice."

The Centre for Socio-Legal Studies (CSLS) has advised judges to hear regular cases despite the volume of political cases flooding the courts.

Mr Tsoho said judges on the task force team would give priority to political suits at the detriment of other regular cases in their courts.

Similarly, the Independent National Electoral Commission (INEC) disclosed that there were 600 pre-election cases pending at the Federal High Court,

But addressing participants at a training on the Administration of Criminal Justice Act, on Tuesday, in Abuja, Yemi Akinseye-George, Executive Director of CSLS, said “the judiciary must not shortchange the public by abandoning regular cases.”

Citing the principle of equality before the law, Mr Akinseye-George, a Law professor and Senior Advocate of Nigeria (SAN), said “the poor and non-politicians have a right to speedy access to justice.”

Represented by Kelvin Mejulu, Mr Akinseye-George urged the Chief Justice of Nigeria (CJN), Olukayode Ariwoola, to prioritise the digitalisation of the courts.

Last Friday, the Attorney-General of the Federation and Minister of Justice (AGF), Abubakar Malami, disclosed that Mr Buhari had approved a new salary package for judges.

Mr Akinseye-George advised the RMAFC to ensure the judges’ salary increment is reflected in the 2023 budget.

He added that the decision of the National Industrial Court of Nigeria prescribing the threshold for the various levels of judges should be considered.

It said poor remunerations for other justice sector workers could “frustrate” judges’ duties.

In his welcome remarks, Mr Akinseye-George explained that the ACJA being a novel law aimed at speeding up criminal justice administration, requires stakeholders efforts in ensuring compliance.

In actualising the implementation of the law, Mr Akinseye-George referred to a group of stakeholders as ‘ACJA Rangers’ who were trained during the two-day programme in Abuja.

He said, “An ACJA ranger has been trained to engage in activities aimed at improving compliance with the ACJA and the ACJL.”

The law teacher added that an ‘ACJA ranger’ is empowered with the knowledge of the law to ensure compliance.

Mr Akinseye-George disclosed that the Centre earlier undertook the training of 370 persons across the 36 states of Nigeria and Abuja for the implementation of the law.

In their goodwill messages, representatives of the Chief Judge of the Federal High Court, the Controller General of the Nigeria Correctional Service and the Nigerian Security and Civil Defence Corps (NSCDC), lauded the Centre for “championing the implementation of the ACJA.”

Nwakaeze Emmanuel who represented the persons boss, called for a review of some provisions of the law that are in conflict with the Nigerian constitution.

They pleaded to collaborate with the Centre in reforming the criminal justice system.

While Toochi Ebonyi represented Mr Tsoho, Ajiboye Hopeman stood in for the NSCDC.

The training, which began on Tuesday, will end on Wednesday.